The 2017 World Series of Poker Circuit Horseshoe Hammond wrapped up on Monday, with a dozen gold rings awarded and two tournaments paying out six-figure prizes. Hometown favorite Blake Battaglia goes home as one of the biggest winners, while Will Berry high-rollered in from Oklahoma to book another impressive score. 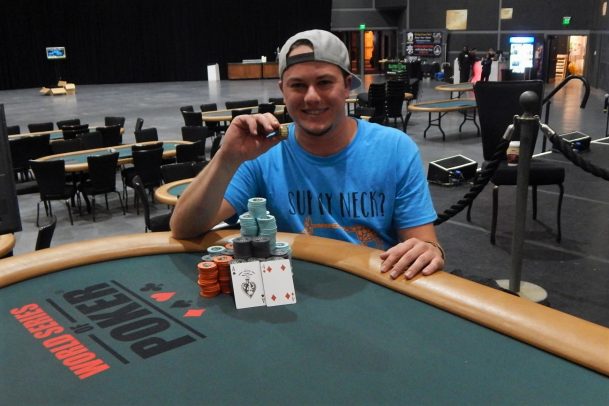 Blake Battaglia had a breakthrough tournament this weekend in his hometown of Chicago. He also got a shiny gold ring to go with it. (Image: WSOP)

A former electrician and father of three, Battaglia fired a bullet and missed on Day 1A, so he re-entered in the Day 1B flight and finished in the middle of the pack with 125,000 chips. By the time the final three tables rolled around, Battaglia was the chip leader, and from there only extended it.

“I had a massive chip lead,” he told WSOP officials. “Like I had almost 20 percent of the chips in play with just 19 left. Today [Day 3] was tough, [but] I just kept telling myself to stay focused play my game. I didn’t need to like press the issue.”

Battaglia held on to the chip lead for a while, but by the time the tournament was down to the final table, Jeff Banghart had taken over as the player with the most chips. Fittingly, the two made it to heads-up. In the final hand of the tournament, which took place in Level 33 (80k/160k/20k), Banghart moved all-in for 3.5 million holding the 3♥3♣ and Battaglia called with the A♠4♦.

It was a flip, and Banghart held on the 9♥6♥2♠ flop. Unfortunately for him, the A♥ spiked on the turn to pair Battaglia. The 5♣ river was of no consequence, and Banghart had to settle for second place and a $205,755 consolation prize.

Prior to the win, Blake Battaglia had $163,565 in total live earnings, including a prior career-best of $30,789 for finishing fifth in last year’s WSOP Circuit Horseshoe Hammond $5,300 High Roller. Four days before that, he also won $17,940 for topping a field of 551 entries in a $200 Special Event at Horseshoe Hammond, which is also home to the Chicago Poker Classic.

This circuit stop also featured a $5,300 High Roller event, which attracted 56 entries. And on Monday night, 25-year-old Oklahoma pro Will Berry prevailed to capture a $105,000 first-place prize and his second gold ring. Back in March, Berry won the WSOP Circuit Hard Rock Tulsa Main Event for $180,806.

“I enjoyed this high roller a lot,” Berry told WSOP officials after the win. “I think the structure was great. I actually think this was more enjoyable than the main [event]. Not just because I won, but the people were pretty friendly throughout. It’s just a looser atmosphere.”

Berry, who has a degree in Petroleum Engineering from the University of Oklahoma, continued:

“I like to think that I’m constantly improving. I try to play as many tournaments as I reasonably can. It’s kind of hard when you have to travel around to places, but I put in the hard work when I’m at home and I guess the results are starting to show.”

It’s also worth noting that Edward Han claimed the WSOP Circuit Horseshoe Hammond Casino Championship with 87.5 points, thanks to three cashes, one of which was a gold-ring win.