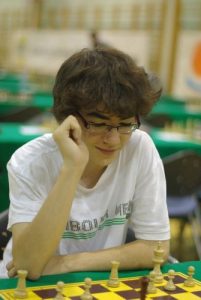 Poland’s Sebastian Malec takes a selfie on the rail as he scoops his first EPT title and $1.2 million. (Image: Twitter/@GM_Malcev)

The latest European Poker Tour (EPT) champion, Sebastian Malec, had to beat a record field in Barcelona to pick up paycheck worth $1,258,210.

Thanks to PokerStars’ decision to rebrand the EPT in 2017, the €5,300 ($5,900) Main Event was the last time an EPT Barcelona champion would be crowned and that brought players out in force.

With one of the largest EPT prizes up for grabs former competitive chess player and online qualifier Malec knew he had to bring his A-game to the final table if he was going to win.

Starting the session third in chips, Malec was one of the most active players and by the time the final six had become three he managed to oust the UK’s Adam Owen in third.

Calling Owens’ all-in with Ad 8d, Malec’s hand held until the river which meant he went into the heads-up showdown with Uri Reichenstein holding 21 million chips.

With Germany’s Reichenstein leading the way with 32 million chips, the one-on-one battle went on until the early hours of the morning.

As the five-hour mark came and went, it looked as though neither player was going to break the deadlock. Fortunately, the end came and when it did Malec was able to do it in style.

After moving all-in on the turn with a flush, Malec went to the rail and hung out with his buddies while Reichenstein pondered the call with a straight.

Eventually, just as Malec was taking a selfie, Reichenstein called and it was all over. With the final board reading Qh Js 6h 8h 8d, Malec turned over his Ah 3h and stood victorious as the latest EPT champion.

Once the confetti had fallen and Malec’s friends had dispersed, Malec told Pokernews that his unpredictable style made the difference in the end.

Thanks to Malec’s win, Poland now has three EPT winners (Dominik Panka and Dmitry Urbanovic have won in the past) which could be good news for the rest of the country’s poker players.

Back in July of this year, Poland’s Council of Ministers amended the Polish Gambling Act to allow more games to be played online and live.

One of the major changes in the amendment was a clause that allowed poker tournaments to be played outside of casinos. Before the change, only state-run casinos could offer real money land-based tournaments.

While the legal situation surrounding gambling in Poland is restrictive at worst and slightly ambiguous at best, the fact more venues can now host tournaments should help to bolster the local poker economy.

In fact, with Malec’s win likely to generate a new wave of interest in poker across Poland, these legal changes look as though they’ve come just at the right time.