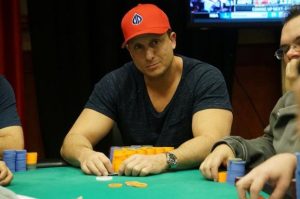 Mike Dentale and Cate Hall will battle on the felt during a Poker Night in America broadcast in March. (Image: pokertube.com)

Cate Hall and Mike Dentale like each other about as much as Hillary Clinton and Donald Trump.

Instead of settling their dispute at the ballot box, the poker players will do so on the felt. And now we have an approximate date and location for the heads-up clash.

Matt Glantz, a self-proclaimed “promoter of all poker grudge matches,” announced on Twitter the two will play in front of the Poker Night in America audience sometime in March.

No official date has been announced.

Doug Polk announced during a recent “Poker Hands” video on YouTube he will be doing commentary for the match. David Tuchman, the lead commentator during WSOP live streams, will join him in the booth.

The match will take place at SugarHouse casino in Philadelphia. Both sides have yet to officially agree on stakes and structure. But the word on the streets is the two plan to play a best-of-three $25-$50 blind match, with a $10,000 buy-in required each game.

Most poker disputes these days begin over a Twitter post. They usually lead to a heads-up challenge, but rarely does such a match ever take place. This one is different. Hall and Dentale despise each other.

Hall is a liberal, Dentale isn’t. Both poker players are extroverts who aren’t afraid to say what’s on their mind. After Donald Trump won the presidential election, Hall was vocal in her displeasure with America’s decision.

Dentale, having read numerous anti-Trump posts from Hall, had enough. He began to insult her character and poker game. He even referred to her as a, “crackhead.”

The dispute quickly led to a heads-up challenge. After hours of back and forth jabs, Glantz and others stepped in to get a match set up. Many poker players requested the match to take place on live stream.

That’s when Poker Night in America and SugarHouse Casino came together to give the fans what they want. Now it’s up to Hall and Dentale to hold up their end of the bargain and show up in March…if anyone still cares by then.

What the Peanut Gallery is Saying

The feud between these two poker players has been the hottest topic on Poker Twitter the past few days. Some are taking sides. Hall has her supporters, as does Dentale.

Others are remaining neutral or feel the dispute is childish and pointless.

Dentale even found some side action from Twitter user @stoffmakers who bet $10,000 with him that Hall would win the heads-up match.

The game of poker is rarely enough gambling for many poker players. Side bets are often half the action.

might not agree with political views of either but Dentale is an ass who went too far
with the trash talk and I hope she cleans his clock . loved her big bluff on him
in Doug’s youtube video. jmo

That was Sam Abernathy in Doug’s video. But, yeah, it was a pretty sick bluff.