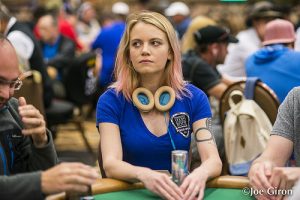 Cate Hall and Mike Dentale are playing for lower stakes than most expected, and poker fans aren’t happy. (Image: wsop.com)

Cate Hall made an admittedly bad play last week during the WPT Bellagio Five Diamond World Poker Classic, bluffing off most of her stack against a player who appeared to have a strong hand (he did).

That caused Mike Dentale to bash her on Twitter. Then she fired back. The two traded insults, and a heads-up match was created.

The match will take place March 19 at SugarHouse Casino in Philadelphia.

Poker Night in America will take care of the live streaming duties so we can all watch these hated rivals battle it out.

Over the past week, poker fans have taken sides and anxiously awaited the match. Hall and Dentale both talked a big game, claiming they would play as “big” as the other wanted. And now we come to find out they aren’t going to play all that big.

Matt Glantz announced on Twitter the heads-up match would consist of a best-of-three with a $15,000 buy-in required in each game with $50-$100 blinds. Once a player wins twice, it’s all over. That means the most either player can lose is $30,000.

That isn’t a lot of Money?

To most poker players, $30,000 is more than they can afford. If you’re grinding $1-$2 blind games ($200 buy-in), playing for that amount of money probably seems like a dream opportunity.

But we are talking about two high-level pros here. Hall recently won $95,000 in a WPT side event at Bellagio and earned $68,000 in a WPT event in Maryland back in October. Last year, she won just under $300,000 in WPT Bellagio Main Event. And that doesn’t account for all her cash games earnings, which is unknown.

Mike Dentale, a business owner, has nearly $1.4 million in lifetime live tournament winnings. These players have played for much higher stakes.

What the Fans are Saying

After discovering how “low” the buy-in is, many poker fans on Twitter expressed their dissatisfaction. To some, it may have felt like waking up on Christmas morning expecting a brand new PS4 to be waiting for them under the tree only to discover all they got was a new sweater.

“So stupid! Who cares! Over under 100 viewers? I’ll take the U,” @worstever_mush posted.

“Fail…waiting 3 months = lost interest and stakes insignificant to both BRs,”

“All this planning and whatnot for 15k or max 30k gain? How pathetic…,” @BigBossBallin expressed.

We could have added another dozen negative comments. Needless to say, Poker Twitter isn’t too happy after finding out the stakes these hated rivals will be playing for.

Maybe some fans can stake these two for some real money.

Assuming there are cash game winnings. Most played become tourney pros for a reason