My previous article established that our playable hand ranges from early and middle positions in a Vegas $1/$2 game should be about 12% and 15%. We can quibble about which combos to include in these ranges, but my choices were based on the hands I think play best in a very loose and passive Vegas game. These are depicted as the shaded region of Figure 1. You should make your own choices, depending on the specific game you are playing.

“Poker is the art of civilized bushwhacking.” 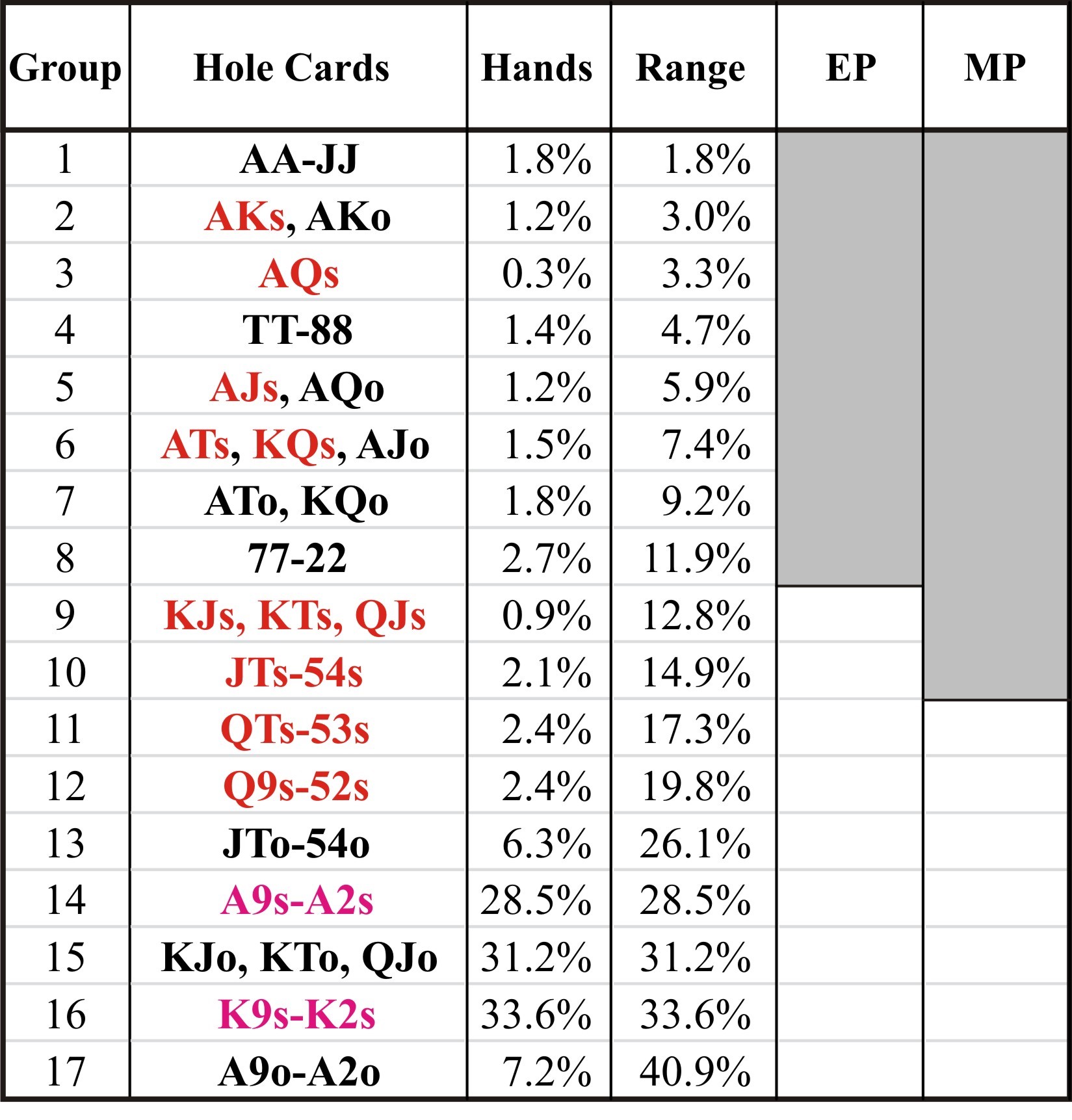 I have arranged these combos into various groups, such as middle pairs (Group 4), suited connectors (Group 10), and suited aces (Group 14). I then ranked these groups in their general order of strength for a typical Vegas $1/$2 game (in my opinion). However, the precise ranking is not critical; we only need to decide whether a particular group is in our playable range.

The Fundamental Reason for Raising

We need to decide which of these combos we should raise with. Fortunately, there is only one reason to raise:

We should raise when it is our highest EV action for the hand!

It is not sufficient for our raise to have a positive expected value in the moment, +EV(now). It should have the highest expected value for the completed hand, ++EV(hand). We can use Flopzilla to estimate our current equity when we are called. When combined with our fold equity, we then calculate whether our raise is +EV(now) or not. But this calculation essentially assumes that the hand is checked down from this point and everyone receives his equity. This is not how most hands actually play out. We usually have future decisions to make, which will impact our eventual EV(hand). This is difficult to estimate in most circumstances.

Suppose we have pocket queens on the button, facing a 5-BB raise and a call. We could 3-bet, and calculate our EV(now) based on our assumptions of fold equity and equity-when-called. This is complicated by the fact that we won’t know which players will call and what their ranges are.

If everyone folds to our 3-bet, our EV(hand) is simply the current size of the pot. Flatting might generate a lower EV(now), but a higher EV(hand). Or we could shove, trying to win the pot right away. Although shoving might be +EV(hand), it usually is not the best we can do.

Most of us simply operate on gut feel, honed by years of play. But there is no guarantee our intuition is correct.

My EP and MP Baseline Chart

We intend to play an 11.9% range from EP, and a 14.9% range from MP. But which of these hands should we raise? I will start by giving you my answer, shown in Figure 2, and then explain why I think this is reasonable. 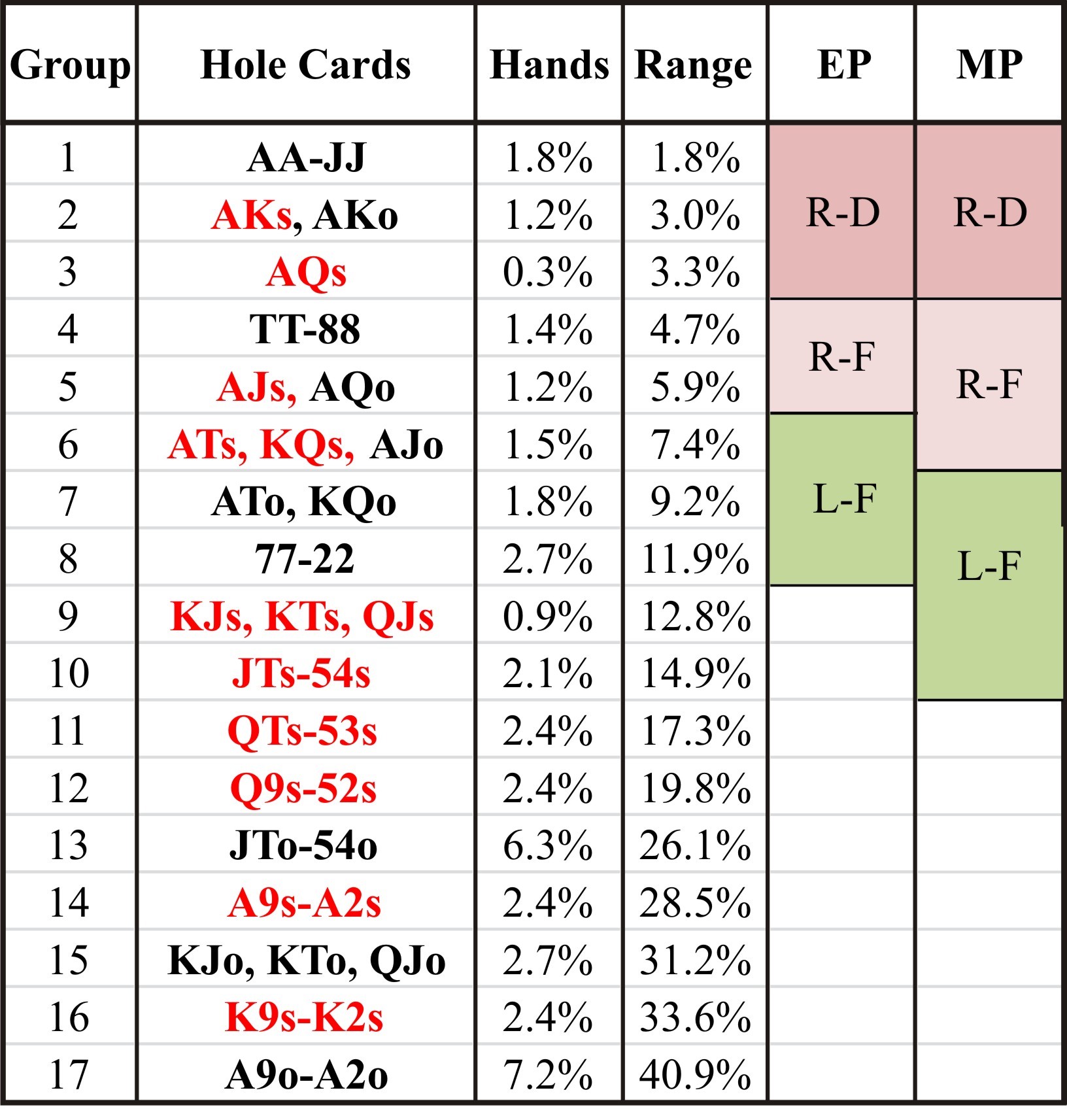 Figure 2. My baseline Vegas $1/$2 EP and MP Ranges, including raising and calling.

The symbols for this chart are simple: “R-D” means we should Raise when we are not facing a raise and Defend when we are facing a raise, Raise-or-Defend. “Defend” simply means that we don’t fold; we re-raise or call. So when we are under-the-gun, our default action is to open. When we are in MP1, we open, raise any limpers, or defend against a normal raise. Notice that our R-D range is the same in EP and MP.

“R-F” means we should raise when we are not facing a raise, but fold to a raise or reraise. So we will open or raise limpers. If it is raised ahead of us, we will usually fold a hand like A-Js or 8-8. If we raise and are re-raised, we should usually fold to the 3-bet. Notice that our R-F range is a bit wider in MP.

“L-F” means we limp when it is not raised ahead of us, but fold when we are facing a race. Remember, this is our default baseline. We can fold instead of limping when our table is aggressive. And we can call a raise when the implied odds justify it. Notice that our L-F range is wider in MP.

Remember that we only raise when it is our highest EV action for the hand. When we play a Vegas $1/$2 game, our raise will often be called by multiple players. So when we raise in EP, we expect to play a multi-way bloated pot out of position. This makes opening a hand like 5-5 from UTG+1 unprofitable for most of us.

So we should raise hands when we don’t mind playing out of position in a multi-way pot. In other words, we should raise only for value. (Raising as a bluff doesn’t have much value when the villains won’t fold.) In my opinion, we can value raise with the first five groups from EP, and the first six groups from MP.

Opening a hand like A-Ts from UTG may be tempting, but it’s a trap. If we open to $8, too many players will call with better hands and superior position. If we open to $15, we risk too much for a small reward. I suspect many Vegas $1/2 players instinctively realize this, which is why they tend to be passive. (Note: this is much different from an online cash game where a smaller 2.5-BB open is more effective at winning the pot immediately, or at least, playing a heads-up pot.)

When we conclude that we can’t raise profitably, we can either fold (most often) or limp (occasionally). Suppose we have 2-2 in the low-jack seat (one before the hijack), with one limper. We have five players to act behind us, plus the limper. We expect our raise to be called by at least two players, and we likely won’t have superior postflop position.

The table is passive, so we expect to be raised less than 20% of time if we limp. Furthermore, if our limp is raised modestly, say to 5 BBs, we might have multiple callers by the time it gets back to us, providing sufficient implied odds for set mining. We won’t always need to limp-fold to the raise.

More likely our limp will induce other limpers, improving our implied odds. When we flop a set, the large number of opponents makes it more likely that someone will pay us off.

So I believe it is more profitable to limp with 2-2 than to raise with it, even if we always fold to a raise behind us.

Calling too many preflop raises is one of the biggest leaks I see in Vegas $1/$2 games (and probably everywhere else). If a player likes his hand, he wants to play it. If he faces a normal raise, he still wants to play it.

We should have a visceral distaste for calling preflop raises, especially from early and middle positions.

Our instinct should be to fold or re-raise. So “Defend” usually means “3Bet” when we are in EP/MP. So, we might fold some pretty decent hands when facing a raise, such as 8-8 and A-Js. This is even more so if we face a 3-bet.

Consequently, our Call-PFR% and Cold-Call-PFR% should be very low from EP/MP. In fact, we wouldn’t go far wrong with a philosophy of never calling a PFR from EP/MP. Nevertheless, there will be occasional opportunities to Limp/Call when the raise is small (say $5 or $6), and several players call.

We should be very tight in EP/MP, and only raise when we think it is our most profitable option for the hand. That restricts the hands we should raise in a Vegas $1/$2 game because too many players call raises. But we can limp with some of these combos when the game is passive. We should also be very reluctant to call a raise. Figure 2 is a compact way to summarize our baseline actions in EP/MP.

Steve Selbrede is a retired Silicon Valley engineer and executive living in Las Vegas. He is the author of six poker books, including his most recent Tournament Poker for the Rest of Us (presented by CardsChat). The charts in this article come from his book Donkey Poker Volume 1: Preflop.

In all honesty, I am really disliking these ranges.
First of all, advising to limp (regardless of the position) is bad IMO, especially if your strategy is limp – fold (seems like a complete waste of money).
Also, I think you have way to many hands that you would put money in (R or L), but fold to aggression. Reality is that in 5 orbits you will fold at least 2 or 3 times when you opened or limped – quite enough for that to be picked up by good players and eventually exploited.

Usually most players who like to see cards tend to pay to get it right and thus end up committing some situations where they may be dominated …. especially when we have a maladjusted flat call range like my kkkkkkk

Another relevant point is about opening many raises …
It is different to confuse aggression with being crazed and playing trying to push in situations where we are not aware of who the players are, and thus commenting numerous errors post flop.