Cash Game Strategy (for the Rest of Us): Early / Middle Position Hand Selection

My last article emphasized the importance of the position game and how we should play about 10% of our online early position hands, and about 13% from middle position. We can widen these ranges somewhat for Vegas $1/$2 games, perhaps to 11% and 14%, since these games are less aggressive, and have larger winning pots. But we shouldn’t go crazy here, such as playing 20% from EP, since we would have serious positional disadvantages.

Until we reach the hijack seat, tight is right in most Vegas low-stakes games.

Now that we have a general VPIP target for early and middle positions, how do we choose which combos to include in our baseline range? One of the most useful tools for analyzing our playing strategy is Flopzilla. We simply select the “No Limit” hand ranking model from the pull-down menu at the top-left of the screen, and then move the range slider to the percentage we wish to study. Flopzilla then displays the combos it considers to be in this range. 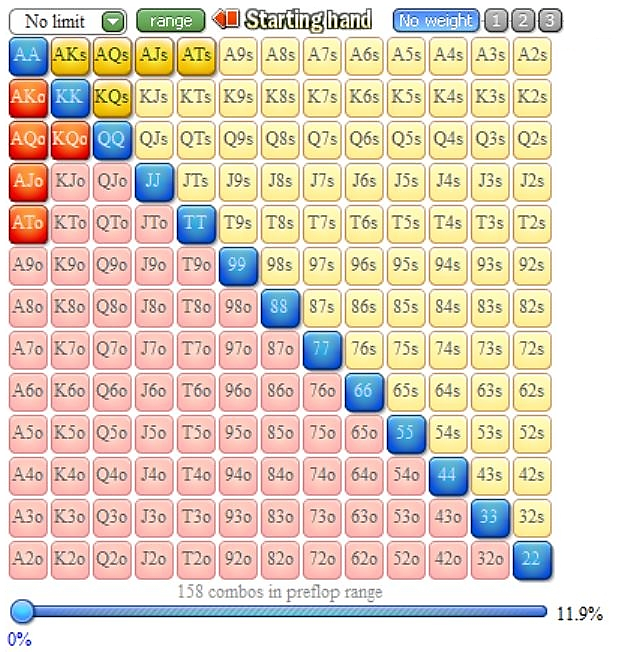 But we can manually select the combos we believe should be in our range. Figure 1 depicts the combos I think play best from EP in a Vegas $1/$2 game, which is an 11.9% range. This is similar to the Flopzilla 12% range, except I have replaced {KJs, QJs, JTs} with {ATo}. This is a subjective choice, and you can make your own choices. For example, you could add QJs and JTs to my range to get a 12.5% EP playable range. Or you could de-select ATo to get an 11.0% range. And you won’t go far wrong by using the Flopzilla “No Limit” ranking, at least for a tight range.

The important thing is that you know which combos are in your personal baseline range, and that you stick to your baseline in most situations.

As a thought experiment, select the combos you currently play from EP in your typical game. For example, you might like to play any ace (which many players do). That would increase your EP range to 22.2%, which is far too loose for profitability. Or perhaps you like suited aces, widening your EP range to 14.9%, not nearly as damaging. It is also interesting to explore which hands the average Vegas $1/$2 player might include in his 37% EP range, which can help us decide which late position combos we should defend with.

We can perform the same analysis for our middle positon baseline range, shown in Figure 2. I define MP as the additional two or three players before the hijack seat, which means that at least 5 players are behind us. 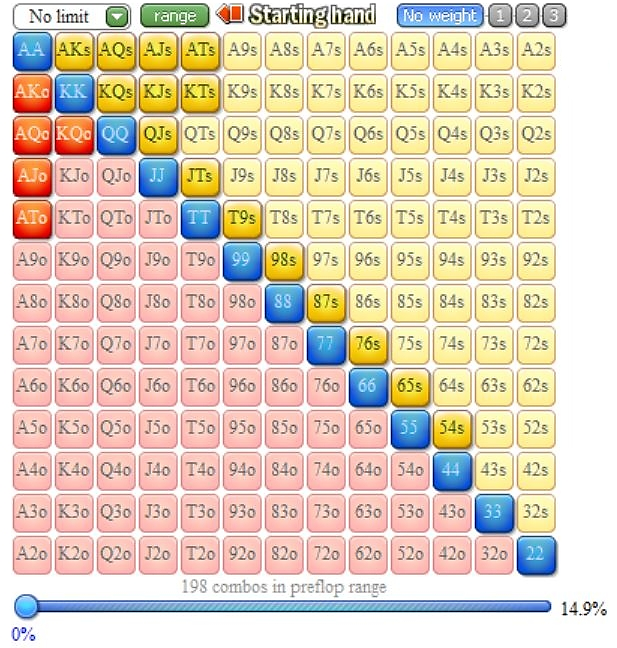 Once again, this is my personal choice for the combos I would play on an average table if no one has raised ahead of me. This range adds all of the suited connectors and most suited-Broadways to my EP baseline range. This differs from the Flopzilla 14.9% range, which is {22+, AT+, A9s, KJ+, QJ, KTs, QTs, JTs}. Flopzilla adds A9s and many unsuited Broadways, and ignores most of the suited connectors.

You may have your own opinion, especially if you are a loose $1/$2 player. But I hate playing easily dominated hands like weak aces and KJo from out of position. This is especially problematical in a Vegas game, since so many players will limp or merely call a raise with some pretty strong hands. This makes it tough to play A9s aggressively on an ace-high flop with no flush draw. On the other hand, a suited connector provides more ways to hit the flop in such a way that we can play aggressively postflop.

So my baseline ranges are 11.9% from EP and 14.9% from MP. This range should be adjusted depending on the poker landscape in our specific game. For example, we may wish to fold the small pairs from EP when the table is aggressive. We may also want to fold some speculative hands on a tight table when the average pot size is too small.

The reason for this is fairly simple. We will be raising with most of these combos, but not all of them. Since Vegas $1/$2 players don’t like to fold, we should be reluctant to raise with a marginal hand like 22 since we are likely to face multiple opponents with poor position. Additionally, a typical open in this game is about $10, creating a large risk with a small reward.

Figures 1 and 2 show my baseline ranges from early and middle positions. But these ranges are somewhat wider than our statistical goals of 11% and 14%. This is because our stat is based on the hands we actually play. Since we will fold some of these combos when we face a raise, our VPIP% stat will be lower than our baseline range.

We should generally be very tight from early and middle positions in a Vegas $1/$2 game. Our target VPIP stat should be about 11% from EP, and about 14% from MP, but we should adapt to the style of players we are facing in the specific game we are playing.

You don’t need to follow my baseline charts, but having a predefined baseline has important advantages. Since you have thought it through, you know your preflop strategy is sound, which helps you maintain discipline. This enhances your confidence, which further helps your bottom line. And a predefined baseline frees up your mental capacity to focus on what your opponents are doing.

Steve Selbrede is a retired Silicon Valley engineer and executive living in Las Vegas. He is the author of six poker books, including his most recent Tournament Poker for the Rest of Us (presented by CardsChat).

Interesting thoughts, but if the table is quite aggressive, then I think that I can play a wider range, since hands like QTo are strong enough in multipot.

hi hi
you very smart guy, thank you much for the excellent information, please questions…
1. why your books so expensive? please reduce so some us poor players can afford (specially kindle editions?)
2. most your emphasis on live cash play, here many us no play live but online and MTT
please can you provide your insight on those formats?
thanks again, hugs
Krista