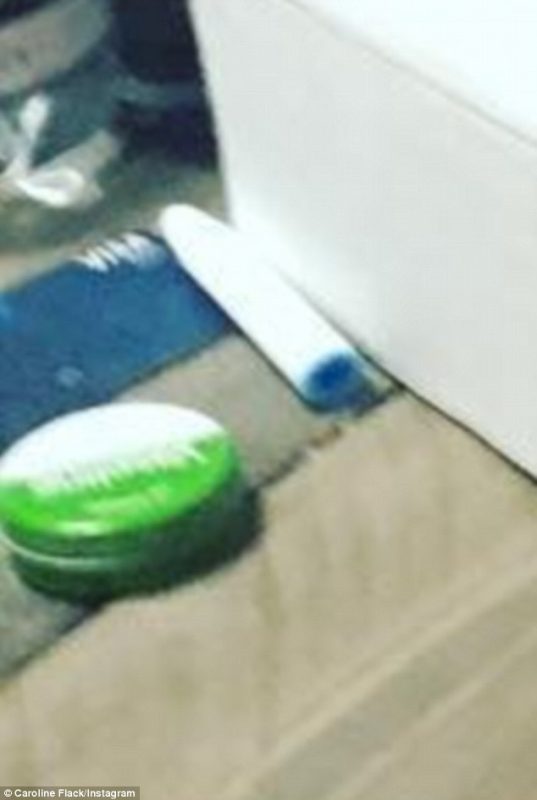 Is it a coke snorting-bill or a kid’s crayon? Caroline Flack insists it’s the latter, but Instagram followers had other ideas. (Image: Instagram/carolineflack)

Flack will be known to many in the UK as the host on shows such as Love Island and The Xtra Factor (she also dated Harry Styles from the pop band One Direction), before she became a regular on primetime TV as part of the EPT’s media team.

Acting as the original host from Season One until the end of Season Three, Flack introduced Channel 4’s coverage of the EPT, as well as player interviews, throughout the main tournaments.

Although her time in the poker world came to an end soon after her departure from that tournament series, she hasn’t lost her love for the game. In addition to hosting her own home games, Flack has taken part in a number of charity poker events, and even became friends with Prince Harry after they played a game together in 2009.

Sniffing Out the Real Story

Her latest home game hit the British tabloid headlines for all the wrong reasons, however. Fans, perhaps projecting their own lifestyle choices, spotted a thick-looking item that could be perceived as a rolled-up bank note, the kind that fast-living celebrities used for snorting cocaine back in the 80s and thereafter.

Our own take? The fuzzy-looking objects behind her are all rather blurry (the Instagram pic has since been deleted, but we post it for you here), and the so-called “coke snorting bill” looks like it could just as easily be almost anything else. Nothing that looks like printed money is on the item, and we’d frankly be more worried about someone somehow decoding the similarly blurry Visa bank card next to it.

The latter, of course, added fuel to the fodder, as credit cards, and playing cards, are often used to cut up coke powder. Hey, we’ve seen Goodfellas more than twice, after all. (In case you haven’t, or have forgotten how the whole game works, we’ve posted a reminder via the Goodfellas clip below).

Although the picture was supposed to have a “sexy” vibe, a number of mainstream media outlets in the UK have latched on to the suggestion that there was drug use during the game. After it was pointed out that the “banknote,” credit card, and Vaseline (not packaged in a way that any American would recognize the latter) could suggest she was taking drugs, Flack went into full-on defensive tackle mode.

After saying that the so-called bill was a “child’s crayon,” Flack posted a close up picture of the item in question on Twitter. Not wanting to leave it there, she also made light of the Vaseline with the innuendo-filled comment: “Thank god no one asked what I use the Vaseline for…MY LIPS PEOPLE, MY LIPS.”

While the original image is far too low quality to make out exactly what the offending item was, Flack’s explanation does seem to tally with her assertion that it’s a crayon. Still, some questioned why she was so quick to delete any comments making reference to drug use if none was occurring.

Flack’s love of late night parties is well-known across the pond. In the past, she was spotted with former Libertines front man Pete Doherty, as well as the now-deceased Amy Winehouse, but since then, she’s tried to clean up her image.

This could possibly be the reason for her haste in deleting the comments that suggested she was taking cocaine during the game. As yet, her management company has declined to comment, but it’s probably safe to say she’ll be vetting any future poker pictures before they go live.