CardsChat Reviews “The Perfect Bet: How Science and Math Are Taking the Luck Out of Gambling”

Adam Kucharski’s brilliant new book The Perfect Bet: How Science and Math Are Taking the Luck Out of Gambling is a study of how gambling has influenced scientific thinking throughout the ages, from probability theory, to game theory, to chaos theory. 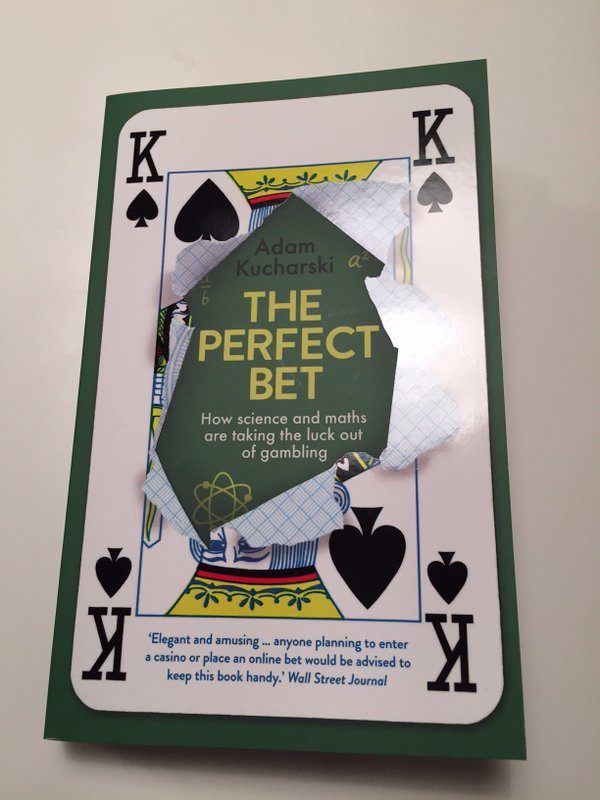 Author Adam Kucharski explains the history of gambling from a scientific and mathematical point of view in this fascinating new book, “The Perfect Bet.” (Image: Simon Kuper/Twitter)

It’s also a history of gambling systems, and of the uber-smart scientists and mathematicians who have taken on the house and won. People like Edward Thorpe, the father of card-counting, who saw his frequent trips to Las Vegas as an “academic obligation.”

Or “the Eudemons,” a group of 1970s mathematical geniuses with computers in their shoes. Their studies on the physics of a roulette wheel were so precise, they found that if they calibrated their calculations when the weather was sunny, the arrival of fog would cause the ball to leave the track half a rotation earlier than had been expected.

These are people who are not so much interested in get-rich-quick schemes, but in gambling systems as pure pioneering intellectual research. They are people who can answer questions like: can a roulette wheel ever be truly random? Or, when does the payout expectation on a lottery become positive?

Cardano Gets the Ball Rolling

And if you think it’s tough to be a gambler these days, pity poor Gerolamo Cardano, a 16th century Italian gambler and polymath, who lived at a time before anyone had realized that gambling games even could be analyzed mathematically (although many of us still don’t, let’s be honest). Thus, it was necessary for the “Phil Ivey of the Renaissance” to invent probability theory as a way to gain an edge over his opponents.

Cardano was also pretty hardcore. Having caught an opponent marking cards, he wrote, “I impetuously slashed his face with my poniard [a small dagger], though not deeply.”

This extensively researched and highly engaging and accessible book will be fascinating to gamblers and students of statistics and mathematics alike. Kucharski is himself a mathematician, and introduces us to those who built upon the work of Cardano, people such as French mathematician Pierre de Fermat and his countryman Blaise Pascal (a numbers genius of his day), right up to the gambling landscape of today where thousands of bots scour financial markets and betting exchanges for exploitable arbitrage opportunities.

Along the way, we learn why even scratch cards may be vulnerable to scientific thinking, and how scientists working on the hydrogen bomb developed theories that today are used by syndicates to beat horseracing. We even come to understand why golf is the hardest sport to forecast using computer modeling.

Kucharski answers many complex questions about the efficacy of various gambling systems, such as the eighteenth century-derived Martingale (betting) System, which seems foolproof on paper, but is, in fact, fairly useless, leading prolific French writer Alexandre Dumas to declare that the system was as “elusive as the soul.”

The UK-based math scholar also provides the answer to many questions you’d never dreamed of asking yourself, such as: “What has tobacco advertising got to do with the Nash Equilibrium and the rise of poker bots?”

There are a couple of strong chapters on poker bots and game theory, which will be of specific interest to poker players. We also learn, tantalizingly, that Enigma code-breaker and father of computer science Alan Turing once began writing a little known treatise on the game, only discovered after his death, and unfinished.

“Gambling is inspiring new research and scientific research is providing new insights into betting,” concludes Kucharski. “Researchers are using poker to study artificial intelligence, creating computers that can bluff and learn and surprise just like humans.

“. . . Meanwhile high-speed algorithms are helping companies make bets and trades automatically, creating a complex ecosystem of interactions that has prompted new avenues of research. Sports analysts, armed with better data and faster computers, are no longer just predicting team results; they are picking apart the roles of individual players, measuring the contribution of chance and skill.”

Gambling systems have never been more sophisticated than they are today, but Kucharski’s book reminds us that we are all standing on the shoulders of giants.

The game of poker hinges on precision and by making appropriately sized bets, you can increase your edge over your competition.