Joe Stapleton is sarcastic and witty, but probably couldn’t even beat Jerry Yang in a heads-up poker match. 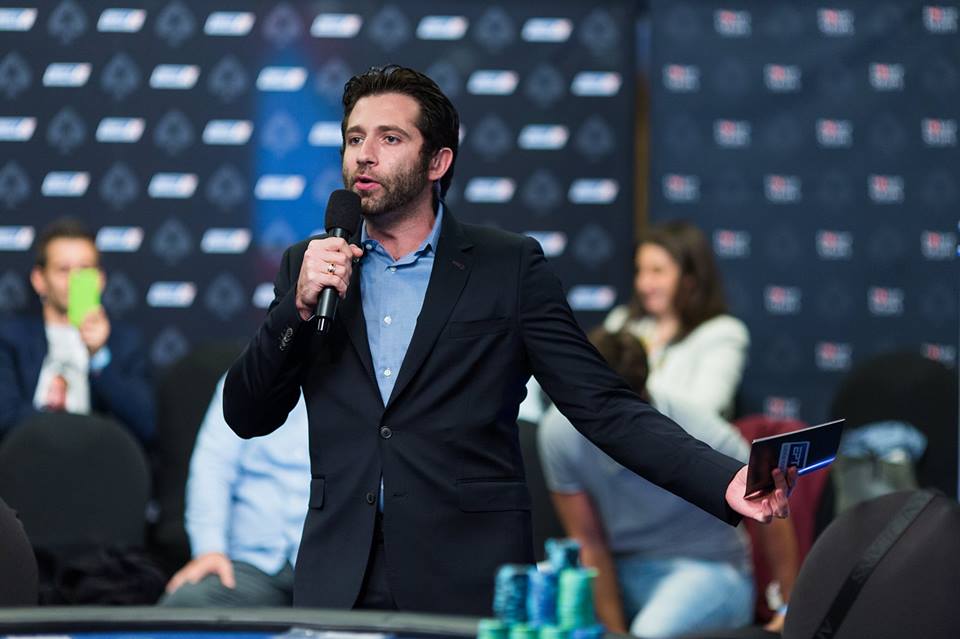 Poker commentator Joe Stapleton will host a stand-up gig at The Comedy Store in Hollywood on May 12. (Image: Facebook)

Stapleton is one of the funniest and most interesting characters in poker. The former host of the PokerStars “Big Game” will show off his sarcastic — and sometimes highly offensive — sense of humor in a performance at The Comedy Store in Los Angeles on May 12.

As he prepares for his upcoming gig, I spoke to Joe to discuss the pressure of performing at such a legendary venue, as well as what he thinks of President Donald Trump’s job performance to date, and how a non-pro like himself became one of the top poker commentators.

Performing in a Comedy Mecca

The Comedy Store, a comedy club in West Hollywood founded in 1972, is one of the main venues comedians go to get noticed. Nearly every top comedian of the past 30 years has performed there, from John Belushi and Joe Rogan to Rodney Dangerfield and Eddie Murphy. No pressure in performing in such a legendary club in front of an audience that expects the best of the best, right, Joe?

“There’s definitely added pressure whenever there’s a packed house, [where] between ticket price and a two-drink minimum, [audience members] have spent at least $50 on the night. There is definitely an added thrill and nausea that comes with playing The Comedy Store, yes.”

Joke stealing is no joke. Just ask Joe Rogan, the UFC’s play-by-play announcer, who famously confronted Carlos Mencia on stage at The Comedy Store in 2005 for stealing jokes from other comedians. It’s hard to imagine Stapleton would ever steal jokes, but I was curious to know if he would have been as confrontational as Rogan was if someone copied his routine.

“A comedian did a bit I do — almost word for word — at an open mic and, at first, I was really indignant and pissed off,” he said. “I started thinking about what to do about it and then I realized if I made a stink over a bit, it had better be a really great bit. Like, is this bit even worth making drama over?”

He didn’t think so and conceded that maybe the routine wasn’t stolen, suggesting perhaps the “bit” wasn’t all that great and, therefore, someone else could have easily written the same jokes.

I asked Stapes to give our readers here at CardsChat a preview of the act he’s prepared for May 12, but the joke was too offensive to share. Let’s just say it involved skinny jeans and male genitalia and leave it at that. If you’re curious to know where that joke leads, you can check out his performance next week.

I asked him what topics those interested in attending his show should expect him to cover, and his response was predictably unpredictable.

But Is He Qualified to Provide Commentary? 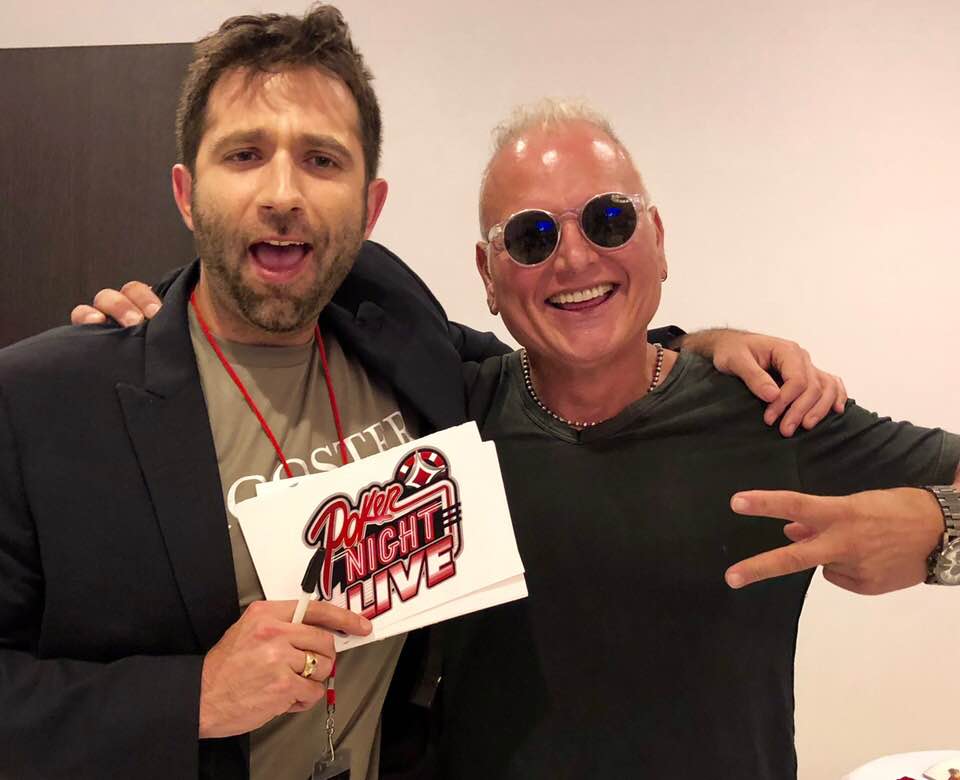 Stapes has “absolutely no interest whatsoever” in becoming a professional poker player and, in fact, the only reason he competes in the cash game on the new Poker Night Live show he hosts is so he can be a “bigger part of the show.”

But he continually gets hired for major commentating roles on popular shows like Poker Night in America and the World Series of Poker.

How did someone with minimal poker expertise become a poker analyst anyway? A reference from a pair of poker legends certainly didn’t hurt.

“I had been doing stuff in and around poker so long. Blogs, podcasts, videos, etc,” Stapleton told me. “People like Daniel Negreanu and Barry Greenstein all championed my cause and they persuaded the powers that be to take a chance on me (on PokerStars’ Big Game).”

In 2016, he scored a gig as lead commentator on Poker Night in America and was recently hired as a player-host on PNIA’s new weekly low-stakes celebrity cash game show Poker Night Live, which airs on the CBS Sports Network.

Stapleton both competes in and hosts the game: a modest $2-$5 cash game with players who can comfortably afford a steeper buy-in. Some haters have criticized the format, suggesting poker fans won’t be interested in watching unskilled players compete in low-stakes games. Strangely enough, Stapes actually agrees with that assessment.

Both commentators come from a comedic background, have facial hair, and admittedly aren’t no-limit Texas hold’em experts. But their commentary has resonated for years with large audiences, because they know how to make poker fun to casual fans.

I told Stapes that I aced speech class in high school by just winging it the day I had to give a presentation. I was curious if he was ballsy enough to show up unprepared on May 12 and crack jokes off the top of his head.

“Absolutely not,” he said emphatically. “That sh*t flies in high school when the bar is lower than Verne Troyer’s toilet (RIP). It also flies when you are insanely, ridiculously talented. Neither of those things is the case [for me].”

Maneuvering Through the Dating World

When Joe meets a lovely lady who is willing to accept his offer for a date, she is likely to ask him what he does for a living, a somewhat tricky question that he’s learned to be straightforward about.

“I say, ‘I do poker commentary on TV,” he’ll tell a date. “I don’t do comedy for a living, and I don’t believe in lying to get girls. I only believe in lying to get away from girls. I do make sure to include ‘TV’ in the title, as I’m always afraid if I say ‘poker commentator,’ they won’t know what it is, but also won’t ask and won’t know I’m on TV.

“What the f*ck good is being on TV if girls don’t know about it?”

You won’t hear any anti-Trump bashing from Stapleton if you see his May 12 act. He says political commentary can “divide a room,” and claims people often tell him when he rants about the “current state of our country,” the audience realizes his truthfulness makes them “too sad to laugh.”

Stapes probably won’t be leaving Poker Night in America any time soon to replace Anderson Cooper on CNN, but the poker commentator isn’t bashful when it comes to his distaste towards President Donald Trump. He often Tweets anti-Trump jabs, and I already knew his opinion of the president, but felt the need to bait him into a political tirade.

I asked his opinion of Trump’s performance now that the former business mogul is 15 months into his presidency, and Joe wasn’t shy in his response.

“I wanted to say [Trump] is the single most embarrassing thing in American history, until I remembered Vietnam, drone strikes, rampant meddling in foreign elections, and slavery, so I can’t. But it’s definitely in the top 10,” Stapes opined.

But what are the chances The Donald wins re-election in 2020?

“I’d say he’s got no shot, but then again, I said that the last time,” Stapleton said. “I’m done underestimating people’s selfishness, stupidity, and meanness. If you don’t believe me, come see my act.”

Joe Stapleton is a good guy and i like him a lot, although I can’t say that I laugh my ass off over the majority of his jokes and “funny”……lines. But when it comes to pure poker commentary he is pretty good and non-boring. I would like him to keep commenting on major live poker events.

Can say I find this guy to be funny.
He is a comentator, that is true, not bad 1 at that, but beyond that, i
“Joe Stapleton: Political Analyst”- yep…political analyst it is LUL
But all and all wish the best for the guy I can remeber him working with poker for years now