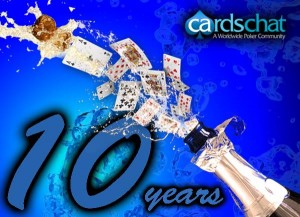 CardsChat will be celebrating its 10th anniversary in September, and as a thank you to its vibrant community, will be running all kinds of exciting promotional events.

Players are encouraged to check out all of the incredible exclusive activities that they can participate in, as the site will be holding many special events, including $10,000 in freerolls, which are open to all members. There are also special events available to players away from the virtual felt, as members will have a chance to win lots of free cash and prizes.

A Quick Look at What’s Coming:

On September 8, CardsChat will celebrate its 10th year in existence. The popular poker forum has already passed two million posts, an impressive feat on its own merit. To show appreciation for members of the site, CardsChat will be hosting a ton of promotions and giving away loads of free cash, with all members invited to participate.

“This is an exciting milestone for CardsChat and I’m thrilled that we’ll be able to give back to our community through so many action-packed promotions. Our members are known as the friendliest and most insightful in the poker world and this anniversary celebration is a reflection of their enthusiasm and love for the game.”

Things will kick-off on Sept. 1 with the Scavenger Hunt. There will be $500 in prizes shared with the top 5 participants, as follows: 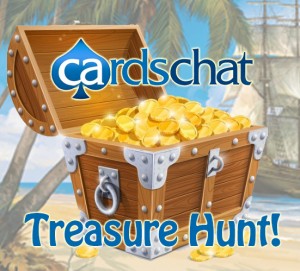 That same day, a Treasure Hunt will begin. Players will want to collect enough poker chips to buy a key to the exclusive CardsChat Treasure Chest. Not every key will be a winner, as only one lucky player will hold the key that unlocks the chest, which contains an Apple iPad Mini.

Then from September 7-21, there will be a “Where in the World is CardsChat?” Facebook Photo contest. This promotion offers up $250 in prizes. Members of the site are encouraged to follow CardsChat on Facebook if they do not already do so, and stay tuned for more details.

While the CardsChat Decathlon of the Decade kicked off back in June and saw all qualifiers conclude last week, the $300 No-Limit Hold’em Freeroll will be played on September 7. The top 10 players from each of the previous freeroll qualifier events won a spot in this tournament. Random prizes will also be awarded, so be sure to root for your favorite CardsChat members as they battle it out for their shares of free cash and loot.

“What players will absolutely not want to miss are our freerolls,” stated popular CardsChat personality and official Forum Administrator Debi “dakota-xx” O’Neill. “We have not one, but two $5,000 freerolls, so there’s a lot of money to be won!”

The two freerolls will take place on September 20 at PokerStars and on September 21 at Carbon Poker, and each have a $5,000 prize pool.The PokerStars tournament will start at 2pm ET and all players who live in countries that permit PokerStars play are eligible to enter, as long as they are members of CardsChat. The Carbon Poker freeroll will be played one day later starting at 5:30 pm ET, and once again there are no requirements to enter, save for being a member at CardsChat.

Finally, there will be an exclusive $600 satellite for the America’s Card Room $1 Million Guaranteed tournament. CardsChat players can enter into the CardsChat 10th Anniversary Satellite to the $1 Mil Guaranteed, which will be played on September 14 at America’s Cardroom. First place will win a $540 ticket to the tournament, while those who finish in second, third, and fourth place will get a $20 gift card from CardsChat. Once again, all members of the site are eligible to participate. To become a member, go to cardschat.com and follow the signup prompts.