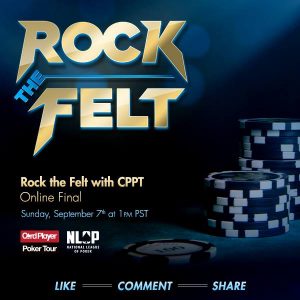 The Rock the Felt promotion gives players a chance to earn a seat during the Bicycle Casino stop of the CPPT. (Image: cardplayer.com)

Online poker is a great opportunity for players to get their fix. It’s a good thing too, because not everyone is able to travel the country and play in live tournaments for a shot at glory and major cash prizes. Players no doubt also hope to catch some of the ripples from the Moneymaker effect and strike it rich from their time in front of a computer screen.

The growing popularity of online poker rooms has led to many sites offering exciting promotions that lead to a seat at a live tournament. As the Card Player Poker Tour nears the conclusion of its second season, an upcoming promotion allows players to shoot for their chance at a pay day.

From September 21 through October 15, the Card Player Poker Tour will make its stop at the Bicycle Casino in Bell Gardens, California. Among the variety of events taking place, a highlight is sure to be the $1,100 No-Limit Hold’em Main Event. While slapping down the fee to gain entry into the tournament is an option, Card Player Poker wants to give more choices to its players.

Already underway, qualifiers for the promotion will run every two hours to help players win their way into the September 17 final. Whoever comes in first place for the event will earn the $1,100 for the Main Event buy-in. A travel allowance including airfare, hotel and transportation to the event is also awarded. The “Rock the Felt” promotion is free, but the Bicycle Casino will also offer live satellites starting at $65.

Back on the Bike

Card Player Poker Tour’s September stop at the Bicycle Casino is actually the second time the location has hosted the tour. From May 23-June 1, 2013 a 10-tournament series took place at the casino culminating in a $1,000 No-Limit Hold’em Main Event with a $300,000 guarantee.

Thomas Beckstead won that event and took home over $102,000.The final days of the Main Event will be streamed on “Live at the Bike” with the final table streaming live on Card Player. The winner also gets featured on the cover of Card Player magazine.

Also known as the Bicycle Club, the Bicycle Casino can be found ten miles south of downtown Los Angeles. 175 poker tables on over 100,000 square feet of floor space make it one of the biggest poker rooms in the world.

The current stop of the Card Player Poker Tour is already underway at the Choctaw Casino Resort located in Durant, Oklahoma. After a July 17 start, the stop will wrap up on August 4. Several satellites and live events are underway with a $1,620 No-Limit Hold’Em $500,000 guarantee event being a definite highlight and starting on August 1.