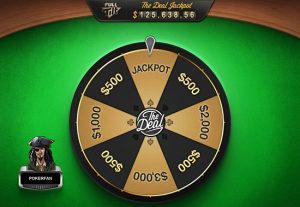 The Deal gives Full Tilt players a shot at winning a progressive jackpot or other prizes. (Image: Full Tilt)

Full Tilt’s new rewards program featured a lot of changes, but the major incentive for players to buy into the plan was “The Deal,” an instant win game that offers a variety of prizes.

Last week, the site saw its first jackpot winner in the new game, as a Canadian hockey coach walked away with nearly $117,000 after landing the top prize.

The new version of Full Tilt’s VIP program, known as the Players Club, was designed to appeal to recreational players, part of which meant giving them a quick way to turn their Full Tilt Points (FTPs) into a shot at a huge prize.

The appeal is similar to that of Spin & Go tournaments: sure, the odds are against you winning a jackpot, but there’s a certain excitement just in knowing it’s possible you might be the one who gets lucky.

That’s exactly what happened to Canadian player “dbecks23ex.” A part-time hockey coach, he gave The Deal a shot while watching the Toronto Blue Jays play the Atlanta Braves.

“At first I thought I won $116, and thought it was kind of cool,” dbecks23x told Full Tilt after his win. “Then I realized it was the jackpot and got an e-mail from Full Tilt.”

In order to play The Deal, poker players on Full Tilt must collect coins, which are awarded for every dollar in rake paid or can be purchased for 20 FTPs each. Each coin can be redeemed to play The Deal once.

Deal Offers Variety of Prizes Based on Hand Strength

The Deal gives out seven face down cards to the player, after which they must choose to discard two.

The remaining five cards are revealed, and players can win a prize based on the strength of their hand.

A minimum of ace-high is needed to win the lowest prize, a ticket into a satellite that feeds into a $1,000 freeroll.

For a shot at the jackpot, players must make a royal flush. If they do, they can spin a wheel that contains a number of prizes ranging from $500 to $3,000, along with one jackpot spot that offers the progressive top prize.

The Deal jackpot is funded by players who take part in the game, much like a progressive slots jackpot.

Each time someone plays, Full Tilt puts $0.03 into the jackpot fund, with 20 percent of that total going towards the next jackpot and the rest being put towards the current prize pool.

According to Full Tilt, the new rewards program appeared to be a success, at least in the immediate aftermath of its launch in August.

The Players Club came on the heels of a major change to the poker room’s lobby, one that saw heads-up cash games removed and a new seating system that assigned players to tables rather than allowing them to pick their seats.

PokerStars Targets YouTube Generation with KSI and The Sidemen Collaboration