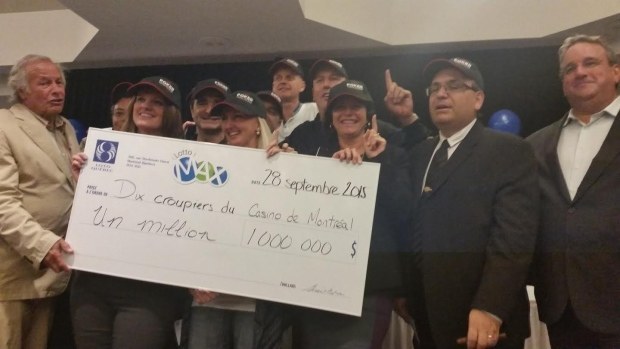 Some Canadian poker dealers got the best tip ever recently: a pooled lotto jackpot win amounting to almost three-quarters of a million dollars in American money.

Let’s face it: poker dealers may be the most under-appreciated people at the table, but they have the power to change the fortunes of everyone they meet with the turn of a card.

More rare is for dealers to catch much of a break themselves, unless they play and win the lottery, as one group of dealers did from Montreal, Canada.

Work Together, Win Together

Working together at Casino de Montréal, the group of ten dealers had a regular player pool for the state lottery and finally had something to smile about this past weekend after their numbers came up.

After purchasing a total of 30 tickets for Loto-Québec’s Maxmillions draw on Friday evening, the group of co-workers later found out that one of their picks had netted the CAD$1 million ($745,000) jackpot.

With some of the group working and others at home in bed when the numbers were called, a series of frantic phone calls rang out across Montreal at 3 am on Saturday morning so the awake portion of the group could share the good news with the snoozers.

After splitting the jackpot ten ways, the CAD$100,000 (US$75,000) haul might not be enough for the dealers to fold their hands for good and retire. But the win should provide enough of a bankroll boost to improve each winner’s life.

For one of the lucky group, Carina Kingsbury, aside from being able to pay off some debts, there will be the feeling of sharing the win with her friends to celebrate and treasure the memory always.

“You’re sharing with other people that you work with. And it’s kind of like sharing a bottle of wine alone or sharing it with a bunch of friends. Even if you have less, you’re with good people and I think it makes it even more special,” said Kingsbury in a post-lottery loot interview.

Of course, the Montreal not-quite-millionaires aren’t the only group of casino employees to enjoy a major win. One poker dealer who won’t be heading back to the other side of the felt anytime soon is Perry Shiao.

The 25-year-old sat down for his shot at glory in Las Vegas this summer and walked away with just under $1.3 million after taking down the WSOP Monster Stack title. After faltering in the WSOP’s Millionaire Maker earlier in the Series, Shiao was able to navigate his way past 7,191 entrants to pick up a life-changing $1,286,942.

Before he won big at the WSOP, Shiao worked as a poker dealer at the Seminole Hard Rock in Florida and wasn’t able to play as much as he wanted.

“It’s a struggle to play while you deal because you deal 20, 30 or 40 hours a week and poker, as you guys can see, is a long, long grind,” he told PokerListings.

Fortunately, like the dealers from Canada, Shiao now has the ability to spend more time playing his hands rather than dealing them.

Lady Luck herself drawn to him who craves it. I think for a while Perry Shiao can afford not to work.