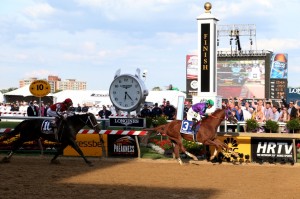 The California racetrack industry will mount a legal challenge should it be excluded from online poker legislation in the Golden State, says a lobbyist.

The California racetrack industry wants to be included in the Golden State’s future online poker market and is prepared to go to court to see that become a reality. That’s the word from California Thoroughbred Breeders Association lobbyist Robyn Black, who believes that poker will be legalized in the state in 2015 and wants to see the racetracks, not just the tribal gaming operators, play a part in the new regime.

The racetracks were written out of the two draft bills, sponsored respectively by Assemblyman Reggie Jones-Sawyer and Senator Lou Correa, which were shelved at the end of this year’s legislative session in August. A new, refined online poker bill will be introduced by Jones-Sawyer next year and it will allow the racetracks to participate.

“We’ve been communicating with tribes and I think at some point in 2015 we’re actually going to see one of these bills move, and I expect horse racing to be a part of that,” Black told PokerNews.com. “It’s probably going to happen in 2015, or it isn’t going to happen.”

Tribes on Both Sides of Fence

California’s previous campaigning exponent of online poker, Senator Rod Wright, made a provision to include the horseracing industry in his failed legislation back in 2012, but Black believes that some of the tribes may have influenced the two most recent bills to exclude the racetracks in order to protect their own interests.

Senator Wright resigned this month in ignominy, having admitted to lying about his address when he ran for office, and Correa won’t be around next year either, due to California’s term limits, so it falls to Jones-Sawyer to draft language for a bill on which all interested parties can agree.The assemblyman is determined to succeed this time, and he knows that for the bill to be passed, it must be written in such a way as to avoid any possible future legal challenges, and that means the racetracks must be on board.

Black is clear that exclusion of the horseracing industry would result in such a challenge. Furthermore, the tribes’ argument that the racetracks’ involvement would be tantamount to an expansion of gambling that violates tribal exclusivity, she says, is spurious: “There is no legal basis to keep horse tracks out,” she said. “That’s just the way the tribes want it. To want to artificially limit competition in the Internet poker space … [it] would be the same as us saying we have exclusivity over the Internet so you can’t be on the Internet.”