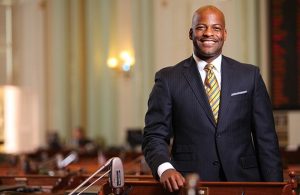 California online poker may have some real momentum behind it, as two new identical online poker bills have been introduced into the state Legislature.

Given the identical nature of the two measures, it’s fair to treat this as one piece of legislation, making it the third online poker bill to be introduced in California this year. The first came from Assemblyman Mike Gatto (D-Glendale), and was notable for having provisions designed to increase foot traffic in smaller casinos and card rooms by allowing them to take deposits for the online sites.

The second came from Assemblyman Reggie Jones-Sawyer (D-South Los Angeles), and included provisions that would allow race tracks to participate in the online poker marketplace.

However, the current bills may have the best chance of any of these efforts to get a real hearing in the legislature.

Hall and Gray are the chairmen of the Governmental Organization Committees in their respective houses, the committees that oversee gaming throughout California. That makes it likely that if any online poker bills see movement, theirs will, since they are in position to best guide the process.

“The issue of iPoker in California has historically been divisive; dealing legislators, the governor and the public a folding hand,” Hall and Gray said in a joint statement on the bill. “It is time to work together, stop bluffing and take control of this issue. Our bills do not create winners and losers. Our bills do not take one entity’s side over another.

“Our bills will give the Legislature, the Governor, tribal governments, other gaming entities, technology providers and the public an opportunity to have an open, honest and thorough debate on this issue.”

Process Will Not Be Rushed

At the moment, the text of the bills is not available, and some are regarding the bills as only placeholders that can serve to get the ball rolling, rather than as a final piece of legislation that the two lawmakers are trying to push through.

Details on the bill are likely to be finalized before February 27, which is the final date for introducing legislation in the current session.

“This will not be a rushed process,” the two lawmakers said in their statement. “Any iPoker proposal must put California taxpayers first and must ensure a safe and responsible entertainment option for adults. If done correctly, this legislation could serve as a national model for other states to follow.”

Grey also added a common refrain among supporters of regulating online poker: it’s better to bring the game into the light than allow it to continue without any oversight.

“We need to crack down on illegal online gaming and replace it with a safe and responsible entertainment option for adults, which includes safeguards against compulsive and underage gambling, money laundering, fraud, and identity theft,” said Grey.

Rallying the divided gaming interests in California behind a single Internet poker bill will still be challenging, but there have been several positive signs over the past week suggesting that compromise is possible.

Caesars and PokerStars recently announced a partnership to promote online poker in America, which included Caesars backing off their calls for bad actor clauses that typically target PokerStars.

Three California Indian tribes have also made it clear that they can live with softer “bad actor” provisions that target individuals rather than brand names, and that they would be okay with the horse racing industry participating in online poker, something many tribes have argued against.

I still really like the notion of requiring a first deposit at one of the B&M card rooms. I know it has been dropped from Mike Gatto’s version, due to player discontent, but think it should be part of the final solution. Only those who can produce valid handicap certifications should be exempted. Call that the ‘Doctors Note’ provision.

The taxation part needs a serious fine tuning. Whatever it suggests in any of those bills should be seriously fine tuned. Experiences in several European Countries can give us a great insight. It can be a life or death thing if the cost of playing is too high. Any OLP site will only pass the cost along, it will not affect their bottom line in any way.

A global player pool is critical. We have already seen (France, NJ, NV, DE) how a limited player pools will mean limited options. A bill could include provisions for local (in State) log on servers (verification and record keeping) but the games should have global appeal for Ca. players which would mean whoever is supplying the game engine is using their global servers for that purpose.

From the players POV, there have been no ‘bad actors’. The sites currently available have been our only salvation, and should be considered (for the most part) proven ‘good actors’. While no preference should be made, they should NOT be penalized for providing a service during this hellish period. I am talking specifically about sites like Bovada, Merge, WPN, and a few others. Stars (and thus FTP) has acted exemplary throughout this ‘hellish period, and if anything might be rewarded with a first in thing, but not by more than 1 week.