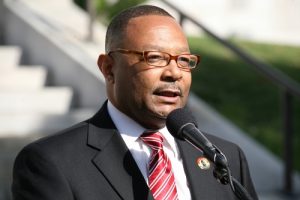 Reggie Jones-Sawyer, whose online poker bill was wiped from the agenda of a House hearing this week to make way for DFS legislation. (Image: lasentinel.net)

While California’s bill to regulate daily fantasy sports (DFS) was overwhelmingly approved by the state legislature’s Government Organization Committee this week, but online poker was pulled from the agenda of the same hearing at the last minute.

The committee had been scheduled to examine Assemblyman Reggie Jones-Sawyer’s bill AB167, which was introduced to the House early last year, but it seems the bill was swept aside in favor of the topic du jour, DFS.

Jones-Sawyer’s bill failed to gain momentum in 2015, as did several other California online poker bills, due largely to division among the state’s tribal operators and other gaming industry stakeholders.

AB167 is more inclusive than its predecessor of 2014. Gone is the fierce non-severable “bad actor” clause, which opens the door for PokerStars to enter a future online poker market, and in the bill’s current form, racetracks would be welcomed into the fold as well.

This is anathema to a group of tribal operators, known loosely as the Pechanga Coalition, who want nothing to do with the aforementioned.

Meanwhile, an opposing tribal collation led by the Morongo Band of Mission Indians and the state’s biggest card clubs, all of whom have a commercial deal with PokerStars, are fully behind the Jones-Sawyer bill.

As long as there is division, there will be impasse.

Online poker, as a fiscal issue, would need a two-thirds majority vote in the state legislature to pass and this could not possibly be achieved without consensus between stakeholders.

It may be that the committee has decided that such a complex issue needs a hearing all to itself, but this didn’t prevent Steve Stallings, chair of the California Nations Indian Gaming Association (CNIGA), from reminding the committee that the issue of online poker must not be forgotten.

“There have been long standing divisions among the stakeholders, including tribal governments, some of which are members of CNIGA,” said Stallings. “However, I believe, the Jones-Sawyer bill opens the door to compromises that can finally bring the majority together.

“We were excruciatingly close last year, and I would like to see CNIGA play a major role in helping to unify the Indian tribes on the key issues that previously divided us and take the lead in supporting a partner bill in the state senate,” Stallings added.

Meanwhile, Assemblyman Adam Gray’s Internet Fantasy Sports Games Consumer Protection Act (AB1437) was passed by a majority of 18 to 1, with two abstentions. The bill would build a regulatory framework for DFS companies like DraftKings and FanDuel, permitting them to become licensed, taxed, and subject to a set of “best practices” in California.

Fantasy Sports has slipped thru the gambling cracks, just like Internet Cafes and illegal sports betting. Major professional sports Leagues continue to fight betting on the outcome of their games, but invest in and support games, based on the fictional outcome of players from their own teams. A lot of questionable practices are being disclosed about the staff of Draft Kings and Fan Duel, taking advantage of information only available to them, and betting on other Fantasy sites. Sports Betting and Fantasy Sports are both activities, that Americans will continue to bet on, whether legal or not. But it seems much better to legalize both, put them under some form of State Gaming Agency, and also earn a small tax for the participating States. With the exception of the NBA, our other professional leagues strongly oppose Sports Betting, but invest in the Fantasy Leagues, and allow their advertising on televised games. Fantasy Sports falsely pretends that their product is skill based, but by the same justification, so is Pari-Mutual wagering or the casino games of Poker and Black Jack. When you invest (make a bet) on an event, hoping to receive a larger payout, its gambling; pure and simple. There may be skill involved, but a great deal of chance is also present; like an injury, a fumble or pass interception, or a missed field goal or free throw. Our citizenry will be much better protected if we follow the Nevada model and allow Sports Betting and approve Fantasy Sports, with new oversight and restrictions. Considering how much money Draft Kings and Fan Duel have spent advertising and promoting their games, the payback percent to winners could be even worse than various state lotteries.