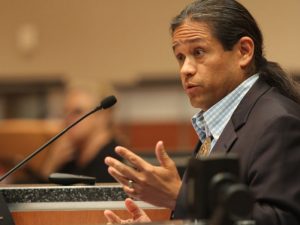 Pechanga chairman Mark Macarro, who refuses to budge on the question of suitability in California. (Image: patch.com)

California’s eternally divisive online poker bill has suddenly gathered some serious backing, thanks to a series of amendments that address the controversial issue of suitability.

Two years ago, the Morongo Band of Mission Indians, refused to sign a letter endorsing the bill proposed by Senator Lou Correa and Assemblyman Reginald Jones-Sawyer that would have frozen PokerStars out of the market.

The Morongos, who had just inked a commercial deal with PokerStars, were the sole tribal operator not to back the bill, a position it shared only with California’s biggest cardrooms, the Commerce Club, the Hawaiian Gardens Casino and the Bicycle Casino.

In the other corner was a coalition of 13 tribal operators that came to be known loosely as the Pechanga Coalition. This group still exists, though their ranks are thinning.

Now, with a bill, AB 2863, that would ultimately accept PokerStars’ participation in a future online poker market, the tables have turned. In a letter to the chair of the Appropriations Committee, which is scheduled to hear the bill tomorrow (Wednesday, June 15), 21 stakeholders have offered their support.

As well as having the full weight of the horse racing industry behind it, which was a recent convert thanks to the promise of $60 million package for its non-involvement, the letter was signed by five tribal operators: the Morongos, Rincon Band of Luiseño Indians, United Auburn Indian Community, Pala Band of Mission Indians and the San Manuel Band of Mission Indians. Also on board are the card rooms and, somewhat unsurprisingly, PokerStars parent Amaya.

The swing in momentum comes as amendments to the bill attempt to redefine the terms of the bad actor language of previous failed bills. Under the new definition, only companies that had offered online gaming to Americans after December 31, 2011, would be considered unsuitable for licensing.

That means PokerStars would be in, but, as a concession to the Pechanga Coalition, the online poker giant would be prohibited from using previous customer lists from when it previously operated in California.

This is not good enough for the Pechangas, who now comprise just five tribal operators. They signified their continued opposition to the bill in a letter to sponsor Assemblyman Adam Gray last week.

“Although we have made some progress under your leadership, we regret that your amendments related to suitability standards and taxation force us to oppose the bill,” wrote Pechanga chairman mark Macarro.

Because the bill is a fiscal issue, it would need to take two-thirds of the vote in the legislature to pass. The question is, could it gain enough votes without Pechanga support? Maybe, maybe not, but online poker suddenly has new momentum in California and it’s never had a better shot.

I notice a new number. 160 mill for the Horse Racing non-involvement. It was 60 mil a year last month. I never liked that.

Is this new 160 mil number a cap? If so I would feel much better about supporting this.

Hi DJ, that is actually a typo, and the correct number is still $60M. They’re fixing it now. Thanks for pointing that out!