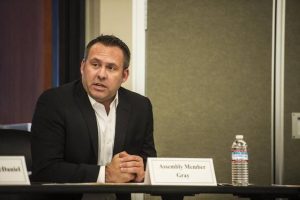 California Assemblyman Adam Gray. Will the proposed amendments to his online poker bill be enough to appease the anti-PokerStars coalition? (Image: modbee.com)

New proposed amendments to California Assemblyman Adam Gray’s online poker bill seek to address that perennial hindrance on the state’s path to regulation, bad actors, and the question of who really deserves a piece of the California online poker pie.

The amendments, which have not been officially added to the bill, were posted online this week by California gaming attorney David Fried.

On the thorny question of suitability they state that only operator who accepted bets from Americans after December 31, 2011 should be precluded from the market.

Previous bad actor language has set the date for 31st December 2006, ie, following the passage of the Unlawful Gambling Enforcement Act (UIGEA). Under the latter definition of a bad actor, PokerStars would not be eligible to apply for a license in California, but under the new cut-off date, it would.

2011 is significant for two reasons: first, in April that year, PokerStars pulled out of the US market following Black Friday; and second, in September, the Department of Justice issued its opinion that the Wire Act did not relate to poker, but to sports betting alone.

This offered clarity on the legality of the internet poker in the US that UIGEA had failed to provide and paved the way for individual states to authorize and regulate the game within their borders.

For this reason, it can be argued that 2011 is a more reasonable cut-off than 2006, although the loose coalition of tribal operators that are opposed to PokerStars inclusion are unlikely to see it that way. For this group, the issue is not bad actors, per se, but PokerStars itself.

Mark Macarro of Pechanga recently complained that PokerStars had gained unfair advantages by operating after UIGEA. It had, he said, been able to refine its software and build its brand at a time when tribal casinos would have been prosecuted for offering such a service.

The new amendments, however, would also prohibit PokerStars from using previous customer lists, from when it operated in California, which may, to a degree, appease the coalition.

The warring factions within California’s gambling sector made great strides by removing one impediment in the process; a $60 million payoff to the state’s horseracing industry in exchange for its non-participation in a future online poker market.

But the issue of suitability remains, as Assemblyman Jim Cooper put it at the most recent legislative hearing, the bill’s “800lb gorilla,” and the Pechanga Coalition is unlikely to view this new definition of a bad actor as a sufficient compromise.

Nevertheless, Assemblyman Gray has committed to meeting a variety of tribal governments “with different perspectives” every two weeks in a bid to find a suitable solution to the problem.