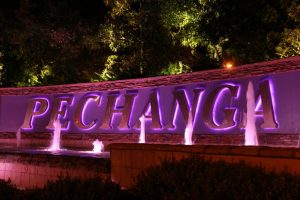 A coalition including the Pechanga Band of Luiseno Indians has previously opposed PokerStars’ entry into the California online poker market, but may be coming around. (Image: joefidelio.files.wordpress.com)

California Indian tribes may be smoking the peace pipe with PokerStars if some new allegiances have the desired effect. Recent confabs at a San Diego convention may have aligned the stars for the poker giant to finally enter the Golden State online poker market, should it go legal.

After all, until now, California online poker efforts have faced one major problem: there are simply too many cooks in one kitchen, and it seems impossible to keep everyone happy.

Card rooms, Native American tribes, and horse tracks (not to mention the potential players themselves) all have their own opinions on how online poker should be conducted, and every Internet poker bill proposed in the state seems to be different.

That said, California does sometimes seem to be inching towards a consensus, and there were more signs over the last week that things are moving in the right direction for those who want to see poker in the Golden State.

According to a report by Dave Palermo of Online Poker Report, some powerful Indian tribes appear willing to change their tune a bit in order to form a broader coalition, one that could include PokerStars.

That news seems to be tied to meetings that took place at the National Indian Gaming Association’s (NIGA) trade show in San Diego last week. It appears that the coalition that includes the Pechanga Band of Luiseno Indians would be willing to work on language that would remove the “bad actor” clauses they have previously asked for, putting them in line with PokerStars and their allies in the state.

Bad actor clauses in online poker and gambling legislation are designed to keep out operators who continued to offer their services in the United States after lawmakers believe it was clearly illegal to do so, usually using the implementation of the Unlawful Internet Gambling Enforcement Act (UIGEA) as a starting point for that distinction.

The use of such provisions isn’t universal: Nevada has such a clause in its online poker market, but New Jersey instead allows regulators to determine each company’s suitability for licensing on a case-by-case basis.

Until recently, the Pechanga coalition has been steadfast in wanting such a clause in any online poker bill for California.

However, it appears that a meeting that included nine California tribes was held at the NIGA convention, and that there was talk of reaching a consensus on the issue. The meeting was put together by Cody Martinez, the new chairman of the Sycuan Band of the Kumeyaay Nation, and it promoted tribal unity as a key for any online poker legislation to be passed.

“That’s the idea Sycuan and Pechanga are floating,” said Robert Martin, chairman of the Morongo Band of Mission Indians. “For the tribes to get together with PokerStars and overcome opposition from the tracks.”

Horse racing tracks may be the key factor that encourages Indian tribes in the state to figure out a way to come to an agreement on a single online poker agenda. Most tribal groups are opposed to allowing horse racing to have a piece of the online poker pie in California, while others are willing to allow them to participate, and still others favor a revenue share for the horse racing industry as a compromise.

The tracks themselves, not surprisingly, have vowed to fight any bill that doesn’t allow them to participate in the online gambling market.

While the meeting was a good first step towards tribal unity on the issue, the OPR story notes that there was no consensus reached at the meetings. However, the tribes have agreed to continue discussions on the issue, which could continue the steady progress that has been seen in recent months.