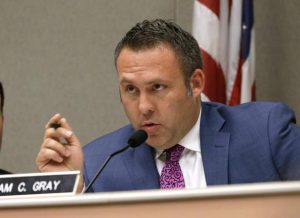 A California DFS bill has passed another hurdle, which could allow DFS sites to operate in the state legally if they pay a fee and get approved for a license. (Image: Sacbee.com)

A California DFS bill allowing websites such as FanDuel and DraftKings to legally operate within the state has now progressed through the state legislature. This bill would change how these major daily fantasy sports sites do business, however.

DFS sites in California, if the bill passes, must receive approval from the state in order to conduct business. To do so, they will need to apply for a license and pay an annual regulatory fee. The amount of that fee has not yet been disclosed.

Assembly Bill 1437, the Internet Fantasy Sports Games Consumer Protection Act, received a 15-0 unanimous vote from the State Assembly’s Committee on Appropriations on Friday. Less than three weeks ago, the same bill was approved by the Government Organization Committee with a 17-1 vote.

AB 1437 will be heard on the floor of California’s state legislature today.

AB 1437 specifically legalizes Internet fantasy sports competitions. The bill doesn’t include online poker legislation, which has been stymied repeatedly by the many factions for and against in the Golden State.

Proponents of online poker, including PokerStars Team Pros and the Poker Players Alliance, have fought hard over the past year to convince California lawmakers of the advantages that legalizing online poker in the state has on the economy.

But that fight, up to this point, hasn’t produced many results.

Up until now, daily fantasy sports websites have been allowed to operate in California, and many other places in the country, without regulation in a murky grey zone of legality.

Once politicians throughout the United States began questioning whether DFS is a form of gambling or a game of skill, lawmakers in many states, including New York and Nevada, have determined that DFS games are games of luck and therefore cannot operate legally in their states with proper licensing. As only online poker is allowed in Nevada by the state’s Gaming Commission, that means that DFS cannot operate legally in the Silver State.

In New York, the state’s Attorney General Eric Schneiderman has banned DFS, also saying it’s gambling under the definition of his state’s statutes.

AB 1437, a bill created by California Assemblyman Adam Gray (D-Merced), has made its way through the required state channels in a relatively short period of time. But no solid movement on Gray’s online poker bill AB 431 has been made, even though some California lawmakers have acknowledged that daily fantasy sports is a form of gambling.

Positive reception from the state legislatures today won’t automatically mean AB 1437 will pass. California Attorney General Kamala Harris could yet weigh in with her opinion, though to date, she seems to have avoided doing so.

If Harris decides to oppose the bill, her view will have an impact on the final outcome. A similar result occurred in Nevada and New York. Attorney General Adam Laxalt’s expressed opinion that DFS constituted online sports betting led to a cease-and-desist order from the Nevada Gaming Commission on all DFS sites in Nevada.

She will wait till last minute to voice opposition or approval to see public opinion. Her team is probably running polls right now or surveys lol.

Perhaps this will wake up the parties that have made online poker a no go in Ca. And so far there is no reason to think those obstructionists have any intention of working it all out.

PokerStars could decide to get in to the DFS game, and bring it’s casino and poker along for the ride under them both being fantasies……