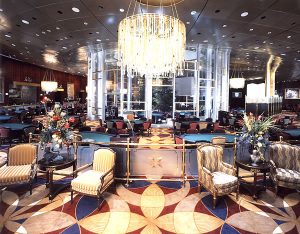 The Hustler Casino in Gardena, California is one of many land-based card rooms pushing for online poker. (Image: thorpeconstruction.com)

Quite a few entities have been vocal in the fight to legalize online poker in California. Many of the larger tribes, especially, have had a hand in creating and wording the two online poker bills that are currently pending in the state legislature.

The only card rooms that have been a part of the discussion thus far seemed to be the three that signed a deal with PokerStars – Commerce Casino, Hawaiian Gardens, and the Bicycle Casino. They partnered with the Morongo Band of Mission Indians and PokerStars to push for online poker with the exclusion of a “bad actor” clause and open the industry to all.

Of the 88 card rooms with licenses to operate in California, many wanted a voice in the fight, and a group of 25 of them finally banded together to be heard.

The group of card rooms, which include entities such as the Hustler Casino and Hollywood Park, penned a letter to California State Senator Lou Correa in the hopes of pursuing a revised online poker bill, similar to that described by a group of 13 tribes who sent a proposal to the same Senator in June.

As suggested by the tribes, the 25 card rooms require any bill wanting their support to exclude “bad actors” from the state, which includes PokerStars and any other company that accepted Internet gaming betting after the passage of UIGEA in 2006. The letter noted that some card rooms did not enter the online poker market after that date due to their respect for the “spirit and letter of state and federal law,” and they do not feel that others, like the unspecified PokerStars, deserve to be in the market. It would be a “mockery of the law” to do so, they claim.

Overall, the group is requesting a revised online poker bill that takes them into consideration. “It is essential that card rooms be able to participate in Internet poker in a meaningful way to protect our existing poker business, jobs and tax base,” they said.

The timeline for California online poker in 2014 is running out quickly. One legislative deadline has already passed, and the final one for the year is coming up on August 31. If one of the currently pending bills is not revised and resubmitted and pushed forward before that date, any chance of regulating online poker in 2014 is likely gone.

California has been widely regarded as the next state to enter the new US online poker industry, and other states like Nevada anxiously await the opportunity to possibly partner with California to expand liquidity. Many of the interested parties in the state want to push a bill through as well.

The sticking points are few, but serious nonetheless. The “bad actor” clause may be the most contentious of them all, with PokerStars (and its new owner Amaya Gaming) desperately wanting to enter the new market, while the vast majority of tribes and card rooms want to keep them out. This may be the impasse that prevents a bill from moving forward in 2014.