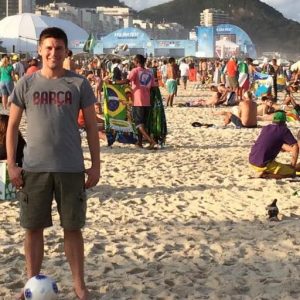 Can Byron Kaverman complete an Ironman in less than 13 hours? $50,000 says he can’t. (Image: Twitter/@ByronKaverman)

Byron Kaverman is the latest high-stakes poker player to enter into a crazy prop bet with millionaire businessman and gambling voyeur, Bill Perkins.

Despite paying $600,000 to Dan Bilzerian back in March after he took the wrong side of a Vegas to LA cycle bet, Perkins is back on the grind with another risky wager.

According to his official Twitter account, Perkins has entered into a $50,000 bet with Kaverman and the overall premise is simple: Kaverman must complete an Ironman event in less than 13 hours.

Time is of the Essence

Apparently willing to put his body on the line for a pride and money, Kaverman will have six months to prepare and complete the challenge which will require him to swim 2.4 miles, cycle 112 miles and run 26.2 miles in a single day.

Official Ironman events have a 17-hour time limit, but Kaverman will have to go significantly quicker than that if he wants to deal Perkins another prop bet blow in the coming months.

Quite how the two poker players agreed on a time limit of 13 hours is unclear, but looking at some analysis of Ironman athletes in 2012, the average participant has a race time of just over 12 hours.

As a physical feat, completing an Ironman is an achievement in itself, so for Kaverman to complete an event in less than 13 hours will certainly be one of the most impressive prop bet wins in recent years.

Prop Bet Season is in Session

Kaverman hasn’t commented on the bet as of yet, but while he is busy planning his training routine, Perkins is already offering up some more money-making opportunities for anyone that can help him.

A short time after booking the $50,000 bet with Kaverman, Perkins tweeted that he’s willing to pay $20,000 to anyone who can correctly identify the person behind the Instagram account @lovesongbytesla.

For those who enjoy railing high stakes prop bets, it’s worth keeping your eyes peeled this summer. One of the consequences of bringing thousands of players to a single point for an extended period of time is that it becomes a breeding ground for prop bets.

Over the last few years, the World Series of Poker (WSOP) has seen some engaging and highly lucrative prop bets.

From Erick Lindgren playing four rounds of golf in a single day for $340,000 to Phil Ivey trying to win two bracelets in two years for $5 million, the WSOP always throws up some entertaining prop bets and things won’t be any different this time around.