Bwin.Party’s US Ops Not For Sale, Says GVC 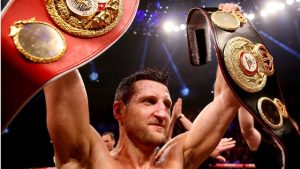 Carl Froch, who signed up as a brand ambassador for bwin.party asset PartyPoker this week. (Image: bbc.co.uk)

Bwin.party’s assets will not be sold, new owners GVC Holdings said this week.

GVC CEO Kenny Alexander told the UK’s Telegraph newspaper that he had received offers from several parties interested in acquiring some of bwin.party’s operations, but he was unwilling to make a deal.

Among the assets discussed was bwin.party’s US-facing operations, as well as its payment processing arm, Kalixa, and its successful bingo brand, FoxyBingo.

Bwin runs online poker and casino operations in New Jersey, in partnership with the Borgata, which until very recently was the leading online gambling site in the state’s regulated market.

It had been speculated that PokerStars parent Amaya might make a move to acquire the US operations once GVC’s $1.1 billion takeover of bwin.party had been finalized.

Amaya stumped up a significant amount of the capital in an early joint bid with GVC that was ultimately rejected by the bwin board, in part because they were uncomfortable with the idea of the company being carved up.

However, now that Amaya has received licensing in New Jersey in its own right, bwin’s US assets may not seem so attractive to the Canadian online gambling giant.

According to the Telegraph, Alexander explained that his focus was on “completing the bwin deal, integrating the gambling company into GVC and halting the revenue decline at the business he is acquiring, rather than planning which parts of the company he might sell-off.”

GVC secured a €400 million loan from a private equity group in order to finance the takeover of bwin.party, a company more than twice its size, and Alexander said he is looking at ways of refinancing the debt.

The purse strings may be tightening, but PartyPoker’s marketing budget appears to be intact. The online poker site announced this week that it had signed four-time super-middleweight world champion boxer Carl Froch as its newest brand ambassador.

The announcement came on the same day that the 38-year-old British boxer said we would consider coming out of retirement for one fight in an attempt to reclaim his title.

Froch says he has been training every day and believes he would beat incumbent IBF super-middleweight champion James DeGale.

The once-mighty Partypoker’s fortunes have been in decline recently, with cash game player numbers for the .com platform falling 31 percent between Q1 of 2014 and the corresponding quarter of 2015, and bwin’s poorly performing poker operations have been a thorn in its side over the past few years.

The new ownership will hope that a high-profile signing or too will help revive those fortunes, and a world champion on its books certainly wouldn’t hurt.