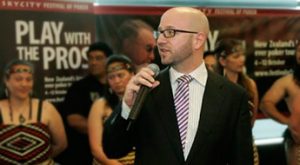 Jeffrey Haas, Group Director of bwin.party, which runs partypoker in New Jersey, is not pleased with the AGA’s stance on US online poker overall. (Image: app.getresponse.com)

The American Gaming Association (AGA), the premier lobbying group for gambling in the US, is usually recognized as a powerful proponent of poker in general, but the director of one prominent online poker site thinks that reputation is unmerited when it comes to the online side of the industry.

Haas was voted the seventh most powerful man in poker in Bluff’s 2014 Poker Power 20 List and, as Director of Poker at the market-leading poker site in New Jersey, is one of the people responsible for shaping the future of the online poker industry in the US.

But what’s got Haas’ goat is the Washington-based industry body’s sudden U-turn in its stance on online gaming in America. Previously a staunch proponent of online gaming, the AGA apparently caved in to pressure from Las Vegas Sands Chairman Sheldon Adelson’s Coalition to Stop Internet Gambling last May, when AGA President Geoff Freeman stated that Internet gambling was now “an issue that the association cannot lead on.”

It was a pretty big change of heart from Freeman. Just six months prior, he had told a House of Representatives subcommittee that a prohibition [of online gambling] “simply does not work” and that “the government cannot put the Internet back in the bottle.”

While the land-based gambling operators of America broadly support the regulation of online gambling, Adelson and, less overbearingly, Steve Wynn, are the two hugely influential exceptions.

Turning his attention to these two adversaries, Haas said he was skeptical of Adelson’s conviction that the legalization and regulation of online gaming is a danger to vulnerable members of society.

“If they were really concerned as they say, they would work with the operators and regulators to bring about more controls,” Haas said, and questioned why two technophobes should be able to define policy on technology.

“If disruption and innovation are so important, so critical to continued success, why is the Internet so dangerous?” asked Haas, as he compared their apparent fear of technology to the persecution and paranoia felt at the Salem Witch Trials.

“Where is the pressure from the AGA?” demanded Haas, emphatically.

The bwin.party poker boss, who had until relatively recently worked for PokerStars, also spoke honestly about the failings of the New Jersey market and how, despite being market leaders, his company had expected it to be three to four times bigger than it actually is.

However, he was full of praise for the regulatory framework that Jersey has put in place. “It’s been a phenomenal success form a regulatory point of view,” he said. “Despite what the demagogues are saying, there is not a single documented case of someone playing from outside New Jersey, or a single case of underage play.”

The AGA is a trade organization, representing casino gaming operators, manufacturers amd suppliers. The membership is not completely behind the online gaming issue, as several members, including the Sands organization and Wynn Resorts, have various concerns that online gaming will harm iindividuals and possibly the established casino industry. As a founding dirctor of the organization, I agree with Sheldon Adelson and Steve Wynn, that online gaming may not be a positive step for the industry. MGM, Caesar’s and Boyd are of a different opinion. So the association, representing the opinion of the entire industry made the right decision to remove itself as the primary sponsor in the effort, to extend online operations beyond the states now in operation, New Jersey, Delaware and Nevada.

I blame Sheldon Adelson, y’all are greedy & don’t want any competition. After listening to Adelson’s speech from G2E 2014 sounds like he is no longer competant to be running anything.