Who's on First? Bwin Bidding War Ratchets Up as 888 and GVC Come Nose to Nose with Proposals
September 1, 2015 Latest Poker News

Who’s on First? Bwin Bidding War Ratchets Up as 888 and GVC Come Nose to Nose with Proposals 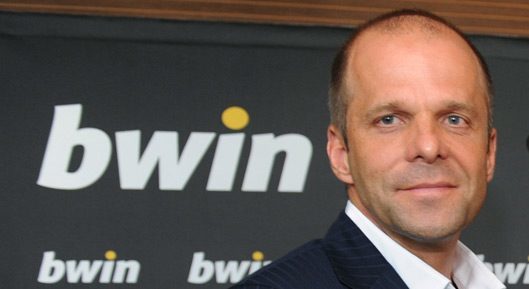 Bwin.party CEO Norbert Teufelberger is mulling an improved offer from 888 Holdings as his company’s bottom line is looking up. (Image: leadersnet.at)

In the latest twist to the ongoing bwin.party acquisition saga, the UK’s Independent newspaper reported this weekend that bwin is due to recommend GVC’s takeover bid of $1.5 billion to its shareholders.

Bwin.party seems to be sitting pretty right now. The company today posted an after-tax profit of €2.9 million ($3.2 million), a stark improvement to the €94 million ($106 million) loss in the same period last year.

Commenting on bwin’s financial results, CEO Norbert Teufelberger said that while profit was up, overall revenues fell from €317.1 million ($358 million) to €296.5 million ($335 million), which he attributed to the absence of a FIFA World Cup, as well as “lower margins in sports, market declines in poker and the impact of EU VAT in certain markets.”

Then 888 Sweetens the Pot

888 Holding’s previous bid of £898 million ($1.4 billion) was favored by the bwin board, which reportedly considered it the “less risky” proposal.

But the Independent article appears to have stirred 888 into action, as bwin said today it was evaluating a new bid from the company.

“The Board of bwin.party is evaluating this proposal, together with that received from GVC, and intends to consult with its key shareholders in the coming days before making a final determination as to which proposal is in the best interests of shareholders,” the company declared in an issued statement.

Other media sources say a final determination on the bwin sale is expected in the coming days.

June 2014: Article appears on Bloomberg claiming bwin.party has hired Deutsche Bank to broker a sale of “all or part of its assets,” prompting the company to quash the rumors the following day.

“There are no plans to break-up or sell the company,” it said.

November 2014: FT Alphaville reports that Amaya is preparing a $1.2 billion proposal for Bwin and the deal is “all but wrapped up.” Speculation results in the first acknowledgment by bwin.party of a potential takeover. It was in “preliminary discussions with a number of interested parties,” the company said.

The London Evening Standard claims that Playtech is also in the mix, while Ladbrokes and Apollo Global Management, which partly owns Caesars Entertainment, are also later named as suitors.

February 13, 2015: Bwin.party shares plunge 20 percent amid rumors that all takeover talks have been aborted.

May 15, 2015: GVC Holdings makes an undisclosed bid for bwin.party.

May 18, 2015: Bidding war escalates as 888 enters the fray with a counter-offer for a sum that is also undisclosed. GVC announces that it has made a joint offer with Amaya Inc. that would ultimately break bwin.party in two.

July 17, 2015: Bwin says that it has recommended the 888 bid, now disclosed at £898 million ($1.4 billion) to its shareholders. Despite being lower than the GVC bid, bwin cites “industrial synergies” with 888 that would result in cost savings further down the line. The GVC/Amaya bid is now felt to be the riskier proposal.

August 30, 2015: The Independent reports that bwin is ready to accept the GVC bid.

This tennis match is giving the current US Open a run for its money.