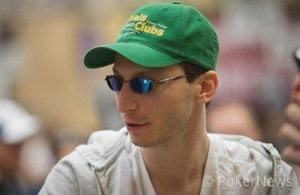 Bryan Micon, whose home was raided by police the day that Seals With Clubs first faced technical difficulties. “Math does not bow to guns,” he says. (image: PokerNews.com)

According to Micon, who is now in Antigua, on February 11 at 8am, the door of his Nevada home was broken down by a team of armed law enforcement officers who held a search warrant from the Nevada Gaming Commission relating to the activities of the Seals With Clubs.

According to Micon, who had computers and electronics equipment confiscated before being released without charge, the raid on his house was not related to the technical difficulties experienced by Seals With Clubs in the days prior to its unexpected demise last week.

“I was handcuffed and lead out half naked onto my front lawn,” said Micon via a video blog from Antigua.  “Over the next eight hours they stole most of my electronics, and of course this is seriously hindering to my output.”

Seals With Clubs was the biggest Bitcoin-only online poker site until it shut down its operations on Friday citing threats to “operational security.” These threats, said an official statement, indicated that the site was in “a perpetual state of jeopardy.” The management chose not to elaborate on this, but all player funds are being honored and are currently available for withdrawal.

We do not believe any of our Bitcoin wallets used in operations to be compromised or lost,” said the site. “This event has made the majority vote of the ownership and team agree shutting down operations is the best move for safety and security purposes.”

On the subject of the technical breach, Micon had this to say: “It’s unclear what happened. The system is of course very secure and has thwarted hacking attempts in the past, so it’s unclear to me what, from a technical perspective, exactly went down, but the rest of Seals With Clubs management quit. They do not want to continue after this, and I do. So, Seals With Clubs will continue to wind down, cash outs will continue to be processed, all the Bitcoins were saved.

“Math does not bow to guns,” he added, oddly.

Whatever really happened to Seals With Clubs, Micon is determined to resurrect a new Bitcoin site from its ashes, and he’s been busy putting a team together in Antigua; SWCpoker.eu will launch shortly, he said. In the meantime, he has another pressing reason to stay in Antigua for a while.

“I was already planning a family trip to Antigua; to relax, play some online poker, explore some business ideas, so after I was lead out at gunpoint in my underwear it was pretty clear that it was proper to leave sooner rather than later,” he said. “I didn’t really want my two-year-old daughter, whom I love very much, to grow up in a police state, where creativity is often met with guns and handcuffs.”

Dude sounds like he is on some heavy stuff. Math doesn’t bow. lol

Can’t shut them down because bitcoin and poker are legal. No banks were involved with seals. I would assume he will be back up in running in no time in a much more liberal country.