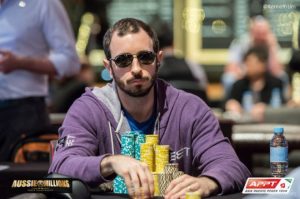 The sum represents the biggest score of Rast’s career to date and the 12th highest first-place prize in the history of tournament poker.

In fact, it almost perfectly doubles his lifetime tournament earnings, which now stand at $15.6 million.

The Super High Roller Bowl, the first of a series of annual tournaments at Aria, was unique in the sense that every penny of the $21.5 million prize pool went to the players, with the casino agreeing to not squeeze a drop of juice from the tournament.

Conceived and produced by Poker Central, the new 24/7 poker network, the Super High Roller Bowl will air on the NBC Sports Network from Friday, 28 August.

Big Names Out in Force

The absence of a casino vig was always likely to attract the big names, and so it proved.

With TV favorites like Antonio Esfandiari, Daniel Negreanu, Phil Hellmuth and Tom Dwan out in force, the tournament will make for the kind of personality-driven poker programming that NBC achieved with its National Heads Up Poker Championship.

Also among the top dogs were the likes of Phil Galfond, Daniel Cates, Doug Polk, Isaac Haxton, Sam Trickett and Pratyush Buddiga, among others.

Rast faced a stellar final table that included Erick Seidel, Tom Marchesse and Connor Drinian, although it would be Scott Seiver, no one’s idea of a soft touch, staring him down in the final.

Rast was facing a 2:1 chip deficit when heads up play began, but managed to claw his way back into contention. Ultimately, it was a $7.525 million coin flip that decided the title.

“It’s a little surreal right now,” Rast told PokerNews, as he was congratulated by friends Phil Laak, Jennifer Tilly and Antonio Esfandiari. “It just hasn’t sunk in yet. The process of staying focused, it’s so consuming that right after it happened this time I wasn’t ready to process that I won. I’m getting ready to go get some drinks in me right now.

“I’ll tell you what,” he added. “That was an amazing tournament. What a rollercoaster ride at the end!”

yup cause its the guys that can afford these buyins who need to be saving on rake pff.

I’m sure it will make for a fun watch all the same.