Brian Rast Wins, Then Loses, Six Figures in a Matter of Minutes at Aussie Millions 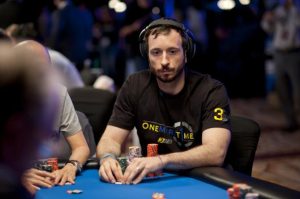 Brian Rast had a wild six-figure upswing, followed by a six-figure downswing, while playing in the Aussie Millions in Australia. You could even say it ended up as a Terrible, Horrible, No Good, Very Bad Day. Kind of. (Image: WSOP.com)

Rast is a well-known, well-liked, and accomplished tournament poker player. At the Aussie Millions, he was able to win a major tournament at Melbourne’s Crown Casino, and won $315,000 in the process.

But shortly after winning the event, he entered a high-roller tournament that required a $250,000 buy-in, and was eliminated on his third hand of play.

Certainly, nobody is faulting Rast for “letting it ride” and taking his winnings and parlaying them into an entry into a high-roller event, considering he had more than $50,000 leftover if the worst case scenario played out.

The story begins with Rast entering the 2015 Aussie Millions Poker Championship and besting 648 players. For his efforts, he finished in fifth place, and grabbed the $315,000 5th-place prize that went along with it. Since Rast paid $10,600 to enter the event, he profited $304,400 from that single tournament alone.

(In a side note, the tournament was eventually won by Australia’s own Manny Stavopoulos for $1.38 million).

As many tournament players already know, late entry into a poker tournament means that your stack will be smaller to the average one and that you will be (or immediately are) short-stacked in the event. It means that the big moment where you have to gamble on good odds with a preflop all-in comes a lot sooner than would ideally happen otherwise.

This scenario is exactly what happened to Rast. On just his third hand of the super high-roller tournament, he shoved all his chips in with A-T. His opponent called with A-Q and Rast failed to improve. After only a few minutes and with $250,000 hard-won currency invested, Rast was eliminated.

And for those of you wondering, that other LK Boutique Super High-Roller event was won by none other than poker superstar Phil Ivey, who won $2.2 million for first place.

This event also awards the David “Chip” Reese memorial trophy and in poker circles, is regarded as the most prestigious event among the pros at the World Series of Poker.

According to multiple online poker databases, his total live tournament earnings exceed a whopping $7.9 million, with his biggest cashing coming courtesy of the aforementioned Player’s Championship at the 2011 WSOP.

Rast is also a very accomplished online tournament player. He’s won about a half-million between Full Tilt and PokerStars, with his largest cash for an online event amounting to just over $144,000.

oh poker, you cruel mistress with your massive ups and downs. why do i love you so?

I don’t think he should have been in the high roller under those circumstances . I think
he needs to pick his spots better and re-think his money management . but I’m not him
and bottom line is he came out $54,000 ahead for the day , a pretty good day for anybody 🙂