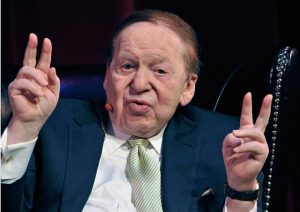 Adelson describes the planned light show at the opening of his new casino, the Parisian, in Macau this week. It uses a new sophisticated heat beam which he calls “a laser.” (Image: David Becker/Las Vegas Review-Journal)

Sheldon Adelson is not content with attempting to wipe regulated online poker in the US off the face of the earth.

He has now besmirched the reputation of online poker as a cerebral pursuit and game of skill.

In a recent interview with Yahoo Finance, in which Adelson was asked his opinion of daily fantasy sports, the octogenarian casino mogul proffered the following conclusion.

OK, fair enough. None of us are really in denial about that. But wait, it gets worse.

“They say poker is a game of skill,” he continued, warming to his theme. “I don’t know how skill can apply to somebody shuffling a deck of cards and randomly giving them out to you. You don’t have any control over it. Can somebody bluff and can somebody place bets better than somebody else? Yes. But that doesn’t make poker a game of skill.”

There must be a counter argument to Adelson’s opinion of poker and the skill that is involved, right?

Enter, Brian Rast, a man who could find an edge on a sphere, and, with $17.7 million in gross tournament earnings, the seventh winningest poker player of all time.

Rast also happened to read Adelson’s comments and was incensed, offering an opportunity for Adelson to put his money where is mouth is.

“Hey Sheldon Adelson, waz up?” tweeted our hero at the mogul. “Poker is a skill game. Don’t believe me? You’re a billionaire, I’m not close. Let’s play HU 4 2 million each.”

After four minutes considering the matter, Rast decided to sweeten the pot.

We’re not sure Adelson is likely to get back to him on this, or read it, as we can’t imagine he actually manages his own social media account.

Besides, he’s probably in Macau overseeing the opening of his new $2.7 billion casino resort, the Parisian Macau, making the final touches to the half-sized replica of the Eiffel Tower, straightening the drapes, etc, etc.

That means the Republican Mega-donor is unlikely to make any mega-donations to Rast soon. But props must go to Rast for sticking up for our beautiful game of skill (and chance), nevertheless.

Meanwhile, in case you were wondering about Adelson’s opinion on DFS, he’s not for it. Unlike the craps and slots games he spreads in his casinos, which are “entertainment,” DFS is “immoral” and “exploits the poor.”

Whatever you say, Sheldon.

Sheldon has done a good job of protecting his turf. Sounds like he is a real Republican, not a RINO. Especially, his it is ok for me but for the masses, I know what is not good for them, so let’s restrict online poker, etc.