Brian Hastings Giving Up Poker as a Full-Time Job 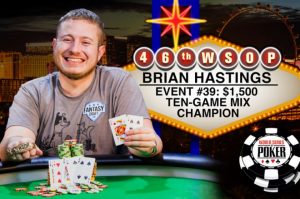 Brian Hastings understands the ups and downs of poker better than anyone.

The 28-year old Pennsylvania native announced in a blog post he is shifting his focus from poker to a start-up business.

He isn’t the first high-profile poker player to give the game up for business. A few years back, Phil Gordon went from poker pro and Celebrity Poker host to businessman full-time.

He is the founder of Chatbox.com, a digital messaging platform.

Poker is often a short-term career option because the game can be so stressful. Not everyone can be Doyle Brunson.

Hastings clearly doesn’t see poker as a permanent occupation but didn’t rule out a return to the game in the future.

In a recent blog post at BrianHastings.com, Hastings announced he has something new in mind for the future.

“The time is now for me to shift my focus to my new company – UniTea (@uniteafl on Twitter and Instagram). More details on that in a blog to come. I feel reborn and I can’t wait for this new journey. If you didn’t notice, UniTea is a pun on unity, something we are in dire need of these days,” he wrote.

In 2009, Hastings made headlines for crushing Viktor Blom for $4.2 million on Full Tilt Poker, the most anyone had ever won in one online poker session. He was on top of the world at just 21 years old. The media chased him down for interviews after his legendary win, even a reporter from ESPN contacted him.

But the honeymoon was quickly over. Hastings was accused of using information provided to him by Brian Townsend about Blom’s hand history.

Many in the poker world labeled him a cheat. As expected, Hastings was upset at this label. He read negative comments on internet forums soon after an interview he did with ESPN.

“Eventually, FTP investigated, stripped my friend of red pro status for a month, and found that I did nothing wrong. Still, from time to time I would hear people label me a cheater. It ate at me some,” he wrote in his recent blog post.

Why He’s Giving It Up

Fast forward to Black Friday in 2011, a day that frustratingly forced ‘Stinger88’ to find new ways to play online. At first, he moved to Canada where online poker is legal. He wasn’t happy there and his depression was getting the best of him so he moved back to the US, eventually finding permanent residence in Florida.

Hastings is one of the most successful under-30 poker players in the world. But he has clearly decided that poker doesn’t make him happy. In fact, according to his blog post, poker appears to be at least part of the reason he’s suffered from depression.

A therapist advised him to move on from poker years ago. But he admits he didn’t have the self-confidence to quit playing, until now.

After all, he was making a ton of money, so why quit?

The answer, per his blog post, is because poker doesn’t make him happy anymore. That’s a good enough reason.

This guy along with his buddies named in this article stole money from me. They all worked together & conspired to all three play me.I thought I was playing one player like all legit players do. To find out they won by cheating and putting all 3 of their minds to beat me at my game and steal,cheat me out of my money.It was no small amount. These guys are walking crooks and criminals in my opinion.Thieves and cheats.

What were the names of the other accomplices?

The other players are Brian Townsend & Cole South. They owe me my money back. Stole it and cheaters.