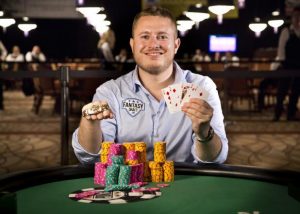 Brian Hastings has won two WSOP bracelets this summer, but faces a battle against the Internet trolls, and PokerStars, if found guilty of playing on a VPN. (Photo: WSOP)

Brian Hastings, the high-stakes US poker pro who took down two WSOP bracelets this month, has allegedly been playing on PokerStars in the US.

Hastings is accused of playing on an account under the name “NoelHayes” (an actual living player, from Ireland), with several big-name online pros verifying that Hastings did indeed play on ‘Stars.

Although US players can’t access PokerStars legally, a VPN (Virtual Private Network) can be used to disguise players’ server location.

This can enable online poker players to access sites banned in their jurisdiction.

PokerStars pulled out of the US market entirely following the Black Friday indictments, and a “bad actor” clause has meant it’s unlikely to be given any licenses in newly-regulated states like New Jersey.

Earlier this week, David “Bakes” Baker, a WSOP bracelet winner in his own right, tweeted:

“So after I FT’d the SCOOP 2k a bunch of well known pros messaged me telling me @brianchastings was behind the NoelHayes account on Stars.”

Inevitably, the 2+2 moral crusaders had their say in a forum thread that has now stretched to over 50 pages.

Baker himself took to the forum to back up his accusation:

“The reason that the high stakes community isn’t ‘up in arms’ is most of them know about it already. They were told directly from the horse’s mouth. If they come out now and denounce it, they lose access to this information in the future.

“I can understand this self-serving attitude for some people, but IMO once you become a PokerStars sponsored player, you give up your right to hoard this exclusive information. I’m trying to wait for a personal response before I really blow up here, but it seems like the deal is that TWO PokerStars sponsored players knew about this situation way before me, and didn’t bring it to the light.”

It’s not known who the ‘PokerStars sponsored players’ Baker is referring to.

The Battle of Hastings

Defending himself, to a certain degree, Hastings replied on the forum:

“I have been following the [accusation] thread some but been very busy this summer playing the WSOP. I’m aware of the allegations, but at this time I have nothing to add to the conversation publicly. I stopped caring what strangers on the internet said or thought about me many years ago; otherwise I probably would’ve jumped off the deep end by now.”

Hastings went on to say:

“The path you’re going on by making this a big public ordeal hurts many parties more than it hurts me. On a macro level, you’re creating a ton of awful PR for the game of poker, which we both love and would love to be able to play in the comfort of our own homes in the country we were born in.”

“This kind of PR is very bad for the future regulation in the USA in the online poker industry, it just adds to the shady rep of online poker.

“Making this the biggest story of WSOP at a time when the WSOP itself is losing its way and poker in America is at a crucial tipping point is just bad for the future of the game.”

Curiously, however, Hastings made no clarification of whether he was guilty or innocent of the accusations.

There have long been accusations flying about Hastings’ online activities. He has allegedly been playing online since he was a teenager, with a 2006 start date for his career making him 18 when he started playing.

Later, in 2009, Hastings was accused of sharing hand information against Viktor “Isildur1” Blom with fellow US pro, Cole South and Brian Townsend.

The US players subsequently won millions from the young Swede on the Full Tilt platform.

Brian Hastings has his head so far up his ”bleep”. He goes on to say ”creating a awful ton of bad PR for the game”. He created this bad PR he speaks of for the game and has the gull to say people talking about it is bad for the came. Its players like him who shed light on the game making it shady cause of his ordeals and cheating he has done in the past. This guy should never be allowed to play at the WSOP or be called a Champion, which is bad for the game.

Also I wonder if Poker Stars knew about this. Players playing under more than one screen name or account is wrong and in my opinion cheating or shady.

Sounds like some Poker Stars Pros Sponsored knew about this. Baker should come out with these players names. The community wants to know I am sure.