Brian Altman isn’t receiving the recognition he deserves from the poker community. The talented pro is having arguably the most impressive season in World Poker Tour history, and his odds of winning WPT Player of the Year are nearly 100-percent. 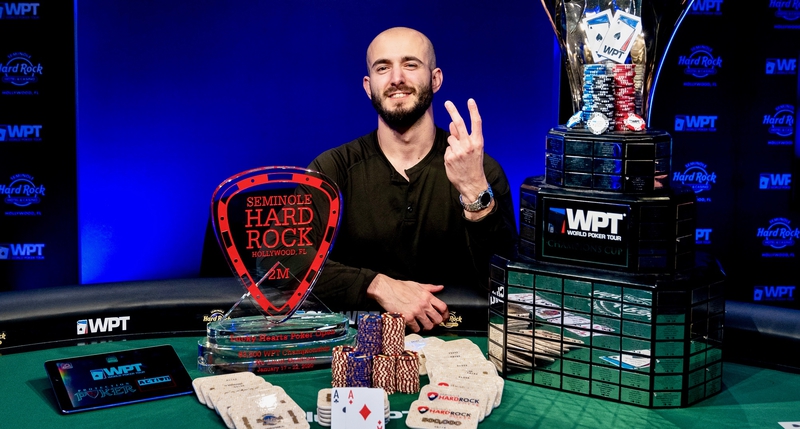 Altman isn’t some donkey on a heater. He’s an accomplished tournament pro with a lengthy history of impressive results. We aren’t talking about Jerry Yang here.

The Massachusetts native has over $4.2 million in live tournament cashes. And, as you’re about to learn, he will soon add a nice chunk of change to that resume.

Brian Altman Running Up the Score

Brian Altman shipped the WPT Lucky Hearts Poker Open in Hollywood, Florida last month for $482,636, the second time he’s won the same event (in 2015 he won it for the first time, earning $723,008, the biggest score of his poker career).

Altman’s recent victory at the Seminole Hard Rock Casino propelled him into first place on the 2019-2020 WPT Player of the Year standings, by quite a sizable margin. He earned 1,200 points, giving him 2,100 for the season. Donald Maloney is in second place with 1,450.

The 2019-2020 World Poker Tour season has just eight events remaining, along with two unfinished final tables. That means it won’t be easy for anyone to catch Altman’s 2,100 points.

But it gets even worse for his competitors. Altman has another 800-1,400 points waiting for him in a couple of months. On top of winning the Lucky Hearts Poker Open and finishing third at WPT Maryland at Live Casino, he achieved the final table at the $3,500 Borgata Winter Poker Open on January 30.

He hasn’t yet been credited with the minimum 800 points he’ll receive in that event. The final table is scheduled for April 1 in Las Vegas. At minimum, Brian Altman will have 2,900 points. With just eight events remaining, it will be nearly impossible for any other player to scoop the Player of the Year title. It would take a first place finish along with another deep run even for Maloney to catch him. And that’s, of course, assuming Altman doesn’t rack up any additional cashes.

Winning WPT POY is impressive, no matter how you do it. But running away with it months before the season concludes, that’s the sort of thing legends are made of.

I suppose it is safe to say he’s got it all sewn up then, since his competition needs literal miracles just to catch up to him… But then again, it’s still mathematically possible for him to lose… so let’s see what happens.

Must feel good having such an incredible lead… Good for him.