In October, the Mid-States Poker Tour (MSPT) hosted the largest poker tournament in Michigan history. The $1,100 buy-in 2016 Michigan State Poker Championship, which was held at FireKeepers Casino in Battle Creek, attracted 884 entries and was won by 27-year-old Brett Blackwood for $188,314. 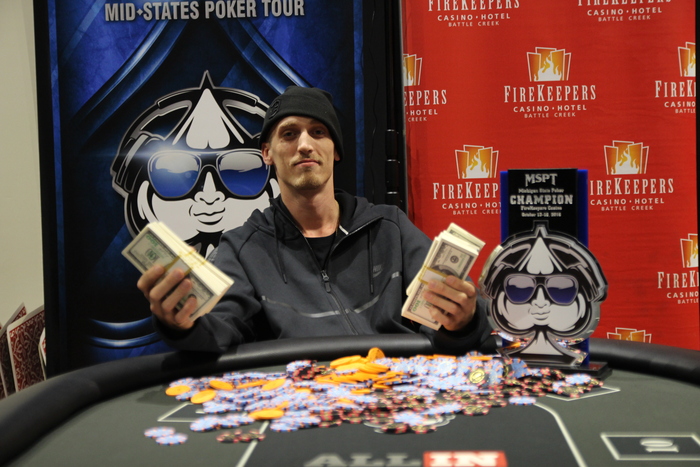 Nice work if you can get it: Almost $190K went home with Brett Blackwood for MSPT’s Michigan State Poker Championships this month. (Image: MSPT)

The 884 entrants (195 on Day 1A, 338 Day 1B, and 351 Day 1C) not only made it the largest tournament in Michigan history by surpassing the 820 runners from May’s MSPT FireKeepers event, it also became the largest event the MSPT has ever held in the Midwest.

At the final table, all eyes were on poker pro Aaron Massey, who won the aforementioned Spring event. At the time, that was the largest tournament in Michigan history, so Massey not only had the opportunity to go back-to-back in MSPT FireKeepers Main Events, but also to win the two largest tournaments in state history. 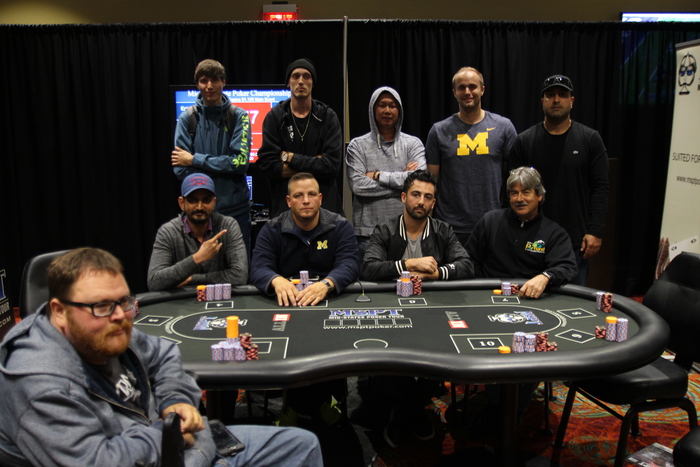 The largest poker tourney in Michigan history drew some of the state’s best to the MSPT final table. (Image: MSPT)

Vinh Ho did the same from the big and three players saw a flop of 7♠8♦Q♠. Both Ho and Cole checked, and Massey moved all in for his last million.

Cole called, Ho folded, and Massey tabled the J♥J♦. Unfortunately for him, Cole had flopped two pair with the Q♥8♥. Neither the 4♣ turn nor 7♥ river changed a thing, and Massey had to settle for seventh place and $23,882.

Blackwood Gets Lucky to Defeat Church

Cy Church held the chip lead the entire final table leading up to heads-up play against Blackwell. The two battled back and forth until Blackwell got it in with ace-jack against ace-king. Church was one card away from winning the tournament, but Blackwell found a jack on the river to take a commanding lead.

Amazingly, Church battled back and a few doubles later, was back in the lead. Blackwell, who was playing in his eighth-ever tournament, then got it in again, this time with ace-nine, and was up against Church’s pocket sevens. Church survived the flop and turn, but Blackwell once again hit the river when a nine spiked. Church was eliminated in second place for $114,314 on the very next hand.

“It feels fake right now, right now it just feels like a dream,” Blackwell said after the win. “I was all in 14 or 15 times, often behind, and just ran spectacular. Heads-up I hit the river twice to stay alive. It feels great. I like the trophy. I’ll put the money in the bank. The PLO bankroll was alright, but it just got a whole lot healthier, you know what I’m saying.”

Season 7 of the MSPT continues November 4-6 with a $300,000 guaranteed Main Event at Meskwaki Casino in Tama, Iowa. For more information, visit msptpoker.com.