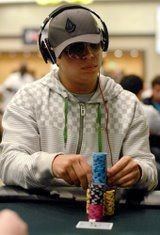 PokerStars continued its PR assault on Brazil and South America this week with the signing of PLO expert and friend of Neymar Jr, Felipe Ramos.

Otherwise known as “mojave”, Ramos has been one of Brazil’s leading pros for a number of years thanks to his antics both on and off the felt.

In fact, during his career he’s not only banked more than $1 million live and online, but built up something of a reputation as a commentator on various TV shows, including Fox Sports and Band Sports in Brazil.

A Friend of the Stars

As well as his own interests, Ramos has used his knowledge of the game to educate a number of Brazilian grinders, including Neymar Jr.

“Yes, Neymar is my friend and I’ve coached him for a long time,” Ramos told CardsChat.

Officially, Ramos will become a “Friend of PokerStars” and fly the flag for PokerStars at various events around the world; most notably in South America.

In response to the news that Ramos will be joining him as a “friend of PokerStars”, Neymar Jr stated that he’s excited for the world to see just how strong a player his friend and mentor is.

“I’m very happy to see my friend Felipe join the team! We’ve played lots of poker together and I’ve learned a lot from him. Now the world will get to see what I already know – he’s one of the very best,” said Neymar Jr.

The first item on Ramos’ agenda is the BSOP event in Sao Paulo, a tour he’s previously cashed on, and from there he’ll head to Brasilia on July 26 to play in the Neymar Jr Charity Home Game.

As well as his offline exploits, Ramos will play online under his familiar moniker “mojave” and he’ll be one of the many pros set to take part in the forthcoming World Championship of Online Poker which kicks off on September 6.

Another potential duty for Ramos may be some public appearances with Neymar Jr. After enlisting the service of tennis pro Rafa Nadal back in 2012, PokerStars assigned him a coach in the form of Alfonso Cardalda.

The pair appeared alongside each other in a number of promotional videos and events as Nadal honed his skills at the felt.

The existing dynamic between Neymar Jr and Ramos could be one PokerStars will want to exploit in the future as they strive to bring more casual players into the game.