Brazil Online Poker Bill Could Be in the Works Thanks to Neymar Jr. 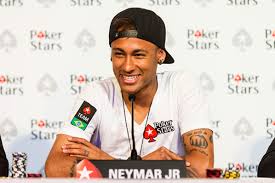 Brazilian online poker legislation could be on the horizon thanks to a soccer star’s influence.

The two have paired together to promote the game worldwide, as PokerStars is attempting to attract more sports fans to online poker.

The country banned most forms of gambling in 2007.

For a country such as Brazil, that amount of money is hard to replace. The economy has been struggling for years and citizens are having a tough time finding jobs. The addition of online gambling could lead to an economic boom.

PokerStars, and other online poker sites, aren’t too concerned with the current state of the Brazilian economy.

They view Brazil as a profitable marketplace, even though so many citizens are struggling mightily financially.

Gambling Proposal on the Way

A Special Commission to the Brazilian Chamber of Deputies is set to submit a proposal to re-legalize gambling throughout the country. This proposal is said to include Internet gambling.

Legalizing gambling in Brazil is seen by some lawmakers as a means to bolster the country’s struggling economy.

“Of 193 countries, gambling has been legally established in 177. 200,000 Brazilians will play in other countries, especially Uruguay, Argentina, Chile and Paraguay. We can not let this much money leave,” said Deputy Nelson Marquezelli.

Dilma Rousseff, President of Brazil, would like to regulate and tax online gambling in the country. She feels such legislation would be a huge step towards generating much needed revenue that can be used to fund important programs such as education.

However, the premise of her proposal, taxing and regulating gambling sites and casinos, is gaining enough interest to make such legislation possible, if not probable.

Gambling was popular in Brazil prior to 2007 when the Supreme Court banned most forms of gambling. Since 2007, many citizens and members of the country’s parliament have begged and pleaded the country to rethink the Supreme Court’s ruling, but to no avail.

Legalized online poker, or any form of gambling, in Brazil won’t happen any time soon. But positive strides have been made recently.

Proponents of gambling have a strong selling point, bolstering a struggling economy by generating revenue from regulated online gambling sites and brick-and-mortar casinos.

The only question now is will enough lawmakers see the potential of legalizing gambling?

Neymar is a very influential person in Brazil. because more football fans there just love festivals. And I think his opinion is definitely consider