Anthony Zinno arrived at the WPT Choctaw final table in Durant, Oklahoma, with the smallest stack but still had dreams of tying Darren Elias as the only four-time World Poker Tour champions. But instead it was Brady Holiman walking away with the Hublot trophy and $469,185. 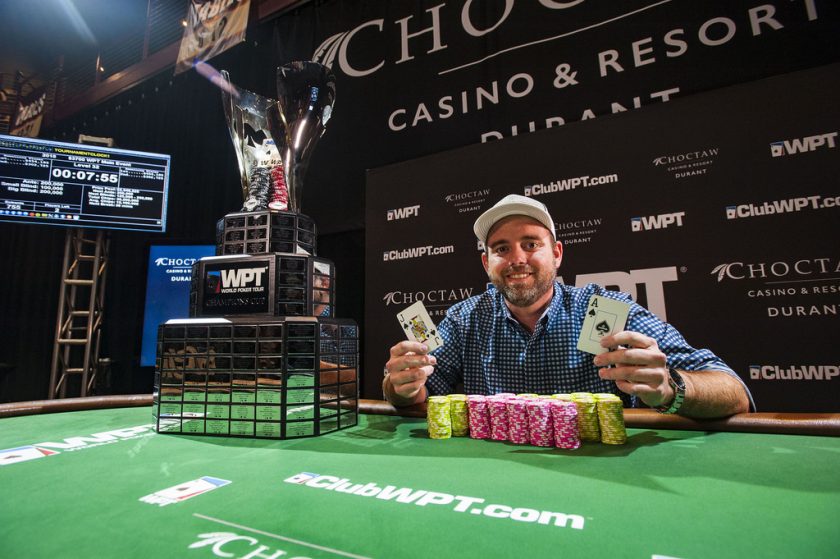 Brady Holiman scooped the WPT Choctaw for $185 — not a bad haul for his first career tournament win. (Image: WPT)

Zinno, one of the top players in the world over the past few years, busted in 5th place ($125,630) when Holiman’s river two-outer (queen to make trips) cracked his aces-up.

Although he didn’t tie Elias for the all-time WPT titles record which was set in May at the WPT Bobby Baldwin Classic in Las Vegas, Zinno can take solace in the fact he’s crushed it this summer.

In July, he scooped a $5,225 event in the Venetian DeepStacks for $466,670 and made two WSOP final tables in June. Coming in 4th at Choctaw isn’t the same as winning the title but it’s another cash on his already impressive tournament resume that now exceeds $8.1 million lifetime.

Zinno’s WPT brilliance began in the 2013-2014 season with a title at the Borgata Poker Open. The following year, he won two WPT championships – LA Poker Classic and Fallsview Poker Classic – to become the Season XIII Player of the Year.

Brady Holiman, a Texan, had less than $40,000 in lifetime tournament winnings before buying into the $3,700 WPT Choctaw. With 755 entries, many of whom are among the top tournament pros in the world including Zinno, he would need some rungood just to cash in this event.

He got more rungood than he could have imagined. Heading into the final table, he held a massive chip lead with six players remaining.

At the final table, which lasted just four hours, he never relinquished that lead and was virtually unstoppable. Holiman eliminated four of the final five bust outs.

Zinno and Ruberto were the lone past WPT champions at the final table. Holiman now also belongs to the WPT Champions Club and has a spot in the season-ending Tournament of Champions in the spring.

There’s a month-long break from the action before the Borgata Poker Open on Sept. 16 in Atlantic City. Immediately after that tournament concludes, tournament grinders will head over the Baltimore for the WPT Maryland at Live Casino on Sept. 21.

Man, could you imagine coming that close to tying the record and missing it by just 3 spots? Getting sucked out on the river in that situation must really leave a hole in your gut for a while. But congrats to Brady Holiman.
I do have a question. Does rungood mean you are playing good or you are getting lucky cards or both? I always thought it just meant you were getting lucky cards, in which case it would be an insult to a player to claim their win was based on luck, not skill.
Anyway, I live about 2 hours from Choctaw and am hoping to play in a tourny there some day. I think the WSOP tourny is there in January, which would be awesome to start the year with a pro face-to-face cash.