Mike Cordell, who last summer won a World Series of Poker gold bracelet in Event #10: $1,500 No-Limit Hold’em Six-Handed, came out on top of a 449-entry field to win the WSOP Circuit $1,675 Horseshoe Baltimore Main Event. For the win, Cordell took down a $148,141 prize, a seat into the Global Casino Championship, and his third gold Circuit ring. 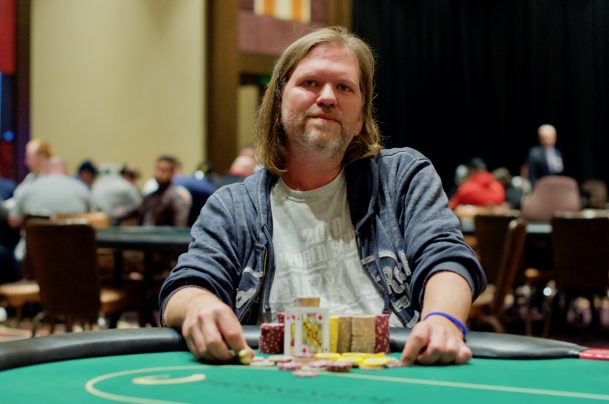 Arkansas’ Mike Cordell now has more gold jewelry to go along with his World Series of Poker bracelet. (Image: WSOP)

The 46-year-old poker pro from Little Rock brought his lifetime earnings up to $780,814, which vaulted him to sixth on Arkansas’ all-time money list.

“I mean, I won the tournament, so it feels good,” Cordell told WSOP officials after the win. “I know I don’t show it, but I’m ecstatic,” said the man who’s obviously mastered the art of keeping his emotions in check.

Cordell took over the chip lead at the final two tables, never to relinquish it. Not only that, when play came to a pause with six players remaining on Day 2, he had more than half the chips in play.

“It’s tough to be scared of anybody when you’ve got all the chips,” he added wryly.

With a triad of lucre on his fingers, Cordell joins the list of triple ring winners that includes Chris Ferguson, Loni Harwood, and Allen Kessler.

The final table was full of experienced players, including 10-time winner Maurice Hawkins, as well as Vanessa Truong, who was still in her victory glow from winning the WSOP Circuit Harrah’s Cherokee Main Event for $318,646 a few weeks earlier.

Hawkins saw his run at a fifth Main Event title come to an end in seventh place, courtesy of Jeremy Stein. It happened on Hand #72, when Stein raised to 57,000 under the gun and Hawkins called from the hijack. Rob Garrett and Cordell called from the cutoff and button respectively to make it four-way action to the K♦3♦5♠ flop. Stein continued for 95,000, Hawkins called off his last 32,000, and the other two players both folded.

Hawkins showed the A♠2♣ for a gutshot wheel draw and a top pair possibility, either of which he needed to hit to beat Stein’s pocket Q♥Q♠. But neither the 7♠ turn nor 3♥ river helped the Circuit’s all-time winningest player, and Hawkins was sent to the rail.

The WSOP Circuit now heads to Harrah’s New Orleans for its last stop of the season. That series, which will run May 11-22, will feature 12 ring events and will be the last opportunity for players to accumulate points toward the Global Casino Championship leaderboard.