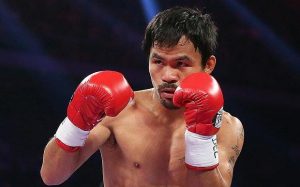 The latest issue of Sports Illustrated (SI) has cast a light on the gambling habits of the man who recently hugged it out with Floyd Mayweather in the boxing ring: Manny Pacquiao.

Over the years it’s been rumored that Pacquiao enjoys high stakes betting, but the article by SI brings his so-called addiction into the mainstream.

Published just a few days after his multi-million dollar showdown with Mayweather, the article outlines how Pacquiao has been known to gamble $360,000 on a cock fight and hundreds of thousands more at the poker table.

According to the author, Chris Mannix, back in 2011 the boxer was at a “crossroads” in his life and would “routinely drop $100,000 at the poker tables.”

For a man that’s made nearly half a billion dollars in the boxing ring, losing $100,000 certainly isn’t a knockout blow.

However, after some digging, it seems the boxer was more than a casual visitor at the tables. Trawling back through the poker archives reveals that Pacquiao has been seen numerous times by members of the community.

In fact, the Filipino slugger became such a regular at the tables that he often found himself playing against the toughest young players in the game.

According to a forum post back in 2011, Pacquiao was seen promoting a fight with Shane Mosley in Las Vegas on a Saturday and was then spotted playing a $100/$200 cash game in LA’s Commerce Casino just 24 hours later.

That eyewitness report was backed up by further tales of Pacquiao exercising his raising arm in cash games across the US. Possibly the most famous story from that time was the boxer’s showdown with online pro, Justin Smith aka ‘BoostedJ’.

Recounted by Smith on his Instagram page, the session saw the poker pro rough up Pacquiao for a few rounds before delivering a knockout blow on the river.

Despite never having played against one of the greatest boxers of all time, Smith decided to adopt an aggressive strategy. Using his superior skills to good effect, Smith was able to force a fold from Pacquiao on the river with nothing more than two useless cards and $100,000.

Immediately after he folded, Pacquiao begged to see the hand and, somewhat gingerly, Smith relented and showed the bluff. According to the story, the power puncher immediately reacted by standing up an approaching Smith.

Fortunately, Pacquiao was able to see the funny side of things and shook Smith’s hand while laughing about the move.

Although stories of Pacquiao playing poker have waned over the last few years, his recent fight purse of $100 million may just be enough to get him back into some high stakes action.

I bet Manny is a donk.