Former boxing champion David Haye has become the last convert to poker after signing a deal with Britain’s Grosvenor Casinos. 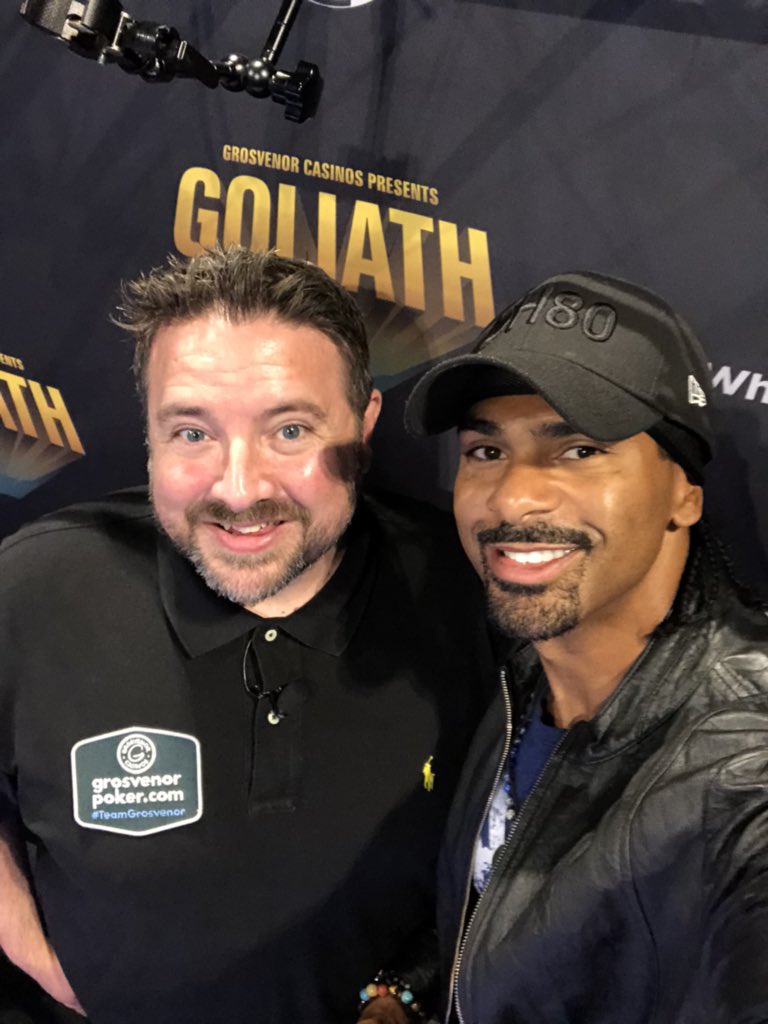 David Haye (right) with Grosvenor Poker pro Jeff Kimber as he prepares for his David vs. Goliath challenge. (Image: Twitter/Jeffkimberpoker)

The 37-year-old Brit who will serve as a brand representative for Grosvenor retired from boxing in May after losing a rematch to Tony Bellew at the O2 Arena in London. With injuries and age forcing an end to his career, Haye now wants to test his mettle at the poker table.

On Friday at the Grosvenor UK Poker Tour in Coventry, England, Hayes released an announcement that he will be learning what it takes to become a poker pro in a promotion called “David vs. Goliath,” which will culminate with Haye playing in the 2019 Goliath event.

Education of a Poker Player


Haye admitted in a July press conference that he’d purposely not learned the rules of poker so that he could approach his new training routine with an open mind. While that may be true, the sports star did take part in a promotional poker event for Full Tilt  in 2014 where he played Rush Poker while sitting in a self-driving Lamborghini.

Regardless of his skill level, the former unified cruiserweight champion will learn the nuances of the game from Grosvenor pros Joe Beevers, Jeff Kimber, and Katie Swift. As well as coaching from a team of experts, Haye will perform promotional duties for Grosvenor as he learns on the job taking part in tournaments around the world.

The knockout artist likened his forthcoming journey to the sport that made him a star.

“I’m genuinely relishing learning from experts,” Haye said at a press conference. “In boxing, if your first coach isn’t correct and doesn’t teach you the fundamentals, you can only go so far. But, if you’re taught sound strategy from the start and have the right mindset, you can progress a lot quicker.”


This isn’t the first time boxers have dabbled in poker or, indeed, poker players have stepped into the boxing ring. Gus Hansen, Theo Jorgensen, and Liv Boeree have all laced up the gloves in the name of winning prop bets.

On the other side of the felt, Partypoker signed former middleweight champion Carl Froch in November 2015.

“I will use every fiber of my being to give as much credibility as I can to what I’m doing,” Haye said. “I’m not  arrogant enough to think that I’m going to be the best poker player in the world, but as long as I can be the best version of me, that’s all I can control.”

Great move by the Boxer. Boxing carrer can be very profit, make a lot of money but for the body and health can be very dangerous. I hope he goes far into Poker carrer.

David was a good boxer, but he could do a show better. This has been repeatedly confirmed. Let’s see how he will show himself in poker)))