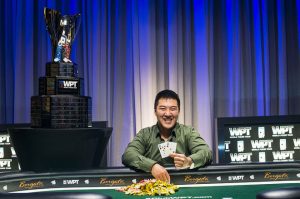 Chris Leong won the Borgata Winter Open and $186,000 in Atlantic City on Sunday night, after managing to wrestle control of a final table that he had entered hours before as the short-stack.

A chip disadvantage wasn’t the New Yorker’s only problem as he nursed his modest stack at the start of play, though. This was a particularly daunting final table, with former WPT Champion Yevgeniy Timoshenko and current WSOP Main Event champ Joe McKeehen facing him down.

Making up the balance of the six-handed final was Matthew Wantman, a prolific mid-stakes tournament casher, as well as Brooklynite Rafael Yaraliyev and Liam He of Massachusetts.

But Leong hung tough against the competition, and, when he knocked out Tomishenko in fifth, he was suddenly a contender.

McKeehen followed Tomishenko to the rail soon afterward. The world champion has proved his tournament skills are stellar, with a steady performance track record both before and after he made the November Nine and eventually won $7.6 million at the WSOP in November. In fact, this was McKeehen’s fifth final table since he qualified for the Main Event final table back in early July.

Along the way, McKeehen won the Wynn Fall Classic in Las Vegas, and picked up over $1.2 million for a second-place finish at the $100,000 Super High Roller event at the PCA. The $250,000 he won in Atlantic City this weekend for a fourth-place finish saw him leapfrog Isaac Haxton on the US all-time money list.

Now Leong was getting the lucky breaks, dispatching Yaraliyev in third when he cracked his pocket sevens with pocket fives.

Facing Yaraliyev heads-up, Leong now held roughly a 2:1 chip lead, an advantage that grew, slowly, over the 100-hand battle. Eventually, with Yaraliyev on the ropes, Leong jammed A-8, and was called by pocket queens.

Although it had been a long night, this was to be Leong’s night. An ace on the flop sealed the deal, giving the New Yorker the biggest score of his career.

Ex-Con Goes from Inside to Straight

Meanwhile, Joe Reddick, winner of the $1 Million Deep Stack event, has been garnering the attention of the mainstream press since his victory last week.

While 2014’s Winter Open was blighted by the criminal actions of Christian Lusardi, who recently began a prison sentence for introducing counterfeit chips into mix at the $500 NLH Big Stack, this year’s event was enhanced by a very reformed former cocaine trafficker.

After a 1992 arrest, Reddick was sentenced to 20 years in prison for conspiracy to transport and distribute crack cocaine. While serving his time, he discovered a talent for writing (he has published several novels under the pen name Joe Black) and learned to play poker with fellow prisoners.

Speaking to The New York Post this week, Reddick described learning the game on the inside, and how, on leaving prison, he headed straight to the casinos of Atlantic City with $500 in his pocket. He’s never looked back.

He told the Post that his ambition is to become the first African-American winner of the World Series of Poker.