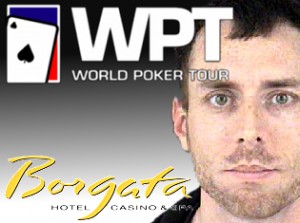 The Borgata’s Spring Open Poker tournament swung into action this week with the addition of special new high-tech “anti-cheating” chips. The chips are more intricately designed, with a plethora of different colors which makes them harder to forge, and also include an element that allows them to be authenticated under ultraviolet light.

The move comes after the Atlantic City casino’s Winter Open Big Stack NLH event was rocked by a cheating scandal in January; the tournament was suspended when it was suspected that counterfeit chips had been introduced. Suspicions were further aroused when Christian Lusardi – a player from North Carolina who won $6,814 during the tournament – attempted to flush T2.7 million in poker chips down the toilet of his hotel room at the nearby Harrah’s Resort.

Feel free to add your own jokes about flushes and splashing the pot here.

Lusardi’s shady shenanigans clogged the pipes, causing water to drip down into the rooms of guests on the floor below. The hapless poker player was subsequently arrested on charges that included theft and rigging a public contest, and is still in custody, awaiting trial.

Now, while we all might stifle a smile at Lusardi’s stupid actions, cheating is no laughing matter, and the folks at the Borgata deserve plaudits for the way they’ve dealt with the fiasco. The event was immediately suspended at the first whiff of suspicion, as is right and proper. $1.5 million in prize money is still on hold pending a thorough investigation (about $800,000 in prize money was already paid out before the fake chips were discovered), and will be paid out once the Borgata is able to redistribute the prize pool to the honest poker players who truly deserve it.

Twenty-seven people remained in the contest when play was suspended, and they will be invited back to play for the remaining pool when the investigation is concluded.

A joint investigation by the New Jersey State Police and the state Division of Gaming Enforcement is in full swing. In the meantime, the Borgata has reacted appropriately by introducing the new chips and tightening security measures.

Checking in the Dark

“We will be checking chips randomly throughout the day using a new process involving the UV lights,” senior vice president of the Borgata, Joe Lupo, noted, adding that the new checks would be “part of the new normal.”

“This was very expensive, but very necessary,” he added, referring to the introduction of the new chips. “In order to have the biggest tournaments in Atlantic City and as the market leader, we need to ensure the integrity of the games … Considering that we have the biggest poker tournaments on the East Coast and we expect to continue to do so, it’s imperative that we ensure that our customers have confidence in the integrity of the tournaments.”

the borgata has already paid players who placed 450-28 their proper equity based on a 2.4 million dollar prize pool. the remaining 27 players are supposed to be dividing 1,433.000 however the borgata and the DGE are giving away refunds to over 2,000 players whether they were or werent affected by the fake chips. less than 1% of total chips were fake yet instead of 1,4 million in equity to divide there is only about 500k.the borgata messed up with lax security, inexperienced dealers, three sets of 5k chips and are in essence making the final 27 players pay the refunds for THEIR mistake. borgata/DGE ruling is a ruling made up these 2 parties!! totally bogus!!