I used to go to the library often to read poker books when I first started playing, which was back in 2003. I tried to consume as much information as possible so that I would have an edge at the table. I felt I could learn everything from a book, which would, of course, instantly turn me into a WSOP champion. It didn’t quite play out that way, though. 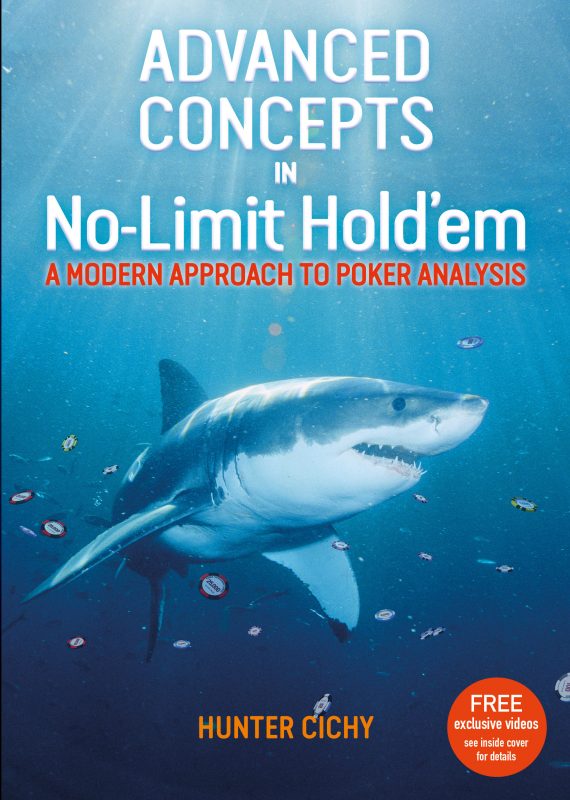 Poker books at the time had very little value. They focused mostly on things like reading physical tells that don’t really help a less experienced player.

And that era of books (with the exceptions of Doyle Brunson’s ‘Super System’ series and some of David Sklansky’s solid publications) lacked a proven system to follow.

Today’s poker books are a different animal, however. Hunter Cichy, a cash game specialist from Minnesota, has written an interesting book (available in classic print, as well as in e-pub, PDF form, and for Kindle) called Advanced Concepts in No-Limit Hold’em: A Modern Approach to Poker Analysis. I read it and have some thoughts to share for those who are in search of solid content that could help take their game to the next level.

To give Cichy some context, he is a 24-year-old poker pro who plays $5/$10 no-limit hold’em cash games all over the country. He’s also had some success as a tournament player, having won more than $700,000 in his young lifetime to date.

When he isn’t playing cards, he’s busy coaching others at CheckShovePoker.com. His training site uses a one-on-one method to teach students how to make real money playing poker.

To clarify the audience for this read, Advanced Concepts isn’t for someone brand-new to the game. It’s probably a better idea for those who, as Phil Hellmuth likes to say, “can’t even spell poker,” to first learn the basics of the game and then consider this book afterwards to rev up your skills.

Those who would benefit from this book are players who want to go from the $1/$2 or $2/$5 level to the $5/$10 cash games. The concepts taught are, as the title indicates, advanced. If you’ve been playing for a while and losing or barely breaking even, chances are you aren’t using a proven winning system. This book would be of benefit.

Getting a Grasp on Game Theory Optimal (GTO) Poker

Game theory optimal (GTO) poker is impossible to play perfectly. But you can learn the fundamentals of GTO so that you are always making the best decision under the circumstances.

Should you make the most optimal decision based on the information you have about your opponent’s range of hands, it’s difficult for your opponents to exploit your game. Advanced Concepts teaches readers how to make that optimal play in every situation imaginable.

Let’s face it, there are thousands of poker books out there. Most are about as useful as one-ply toilet paper. What I look for in a poker book is to some nugget of wisdom I didn’t previously know that can really help my game.

Advanced Concepts hit the mark in that arena. Most of what I read are concepts that I mostly already understood. I’ve been playing poker for many years and have been studying GTO for a while. But I did learn a few new things from the book that I will use at the poker table during the upcoming World Series of Poker.

I’m going to start value-betting bigger, per Cichy’s suggestion in Chapter Three. As he wrote, and I agree, “most people have already made up their minds about calling or folding before you picked your bet size. Exploit their impulsive tendencies by betting a little bigger.”

I often bluff too much and pay for it. But I think, after reading Advanced Concepts, that I’ve figured out a way to cut down on my bluffing, while still getting value out of my big hands.

What You’re Going to Learn

The 273-page book is divided into three main chapters. In Chapter One, you’ll learn the basic math of poker. Chapter Two teaches proper pre-flop play. And the final chapter focuses on post-flop play.

Cichy goes in-depth, explaining how you should bet in nearly every situation imaginable, before the flop and after. You will also learn how to extract the most value out of every hand, when to bet, fold, check, or raise.

The most valuable lessons you will be taught will be how to balance your hand ranges for less predictability, while narrowing down your opponent’s range of possible hands at the same time.

Each chapter includes questions you should ask yourself as you face any situation. For example, in Chapter One, the author advises readers to ponder what they will do if someone three-bets pre-flop. Your move, suggests Cichy, should be based on the position your opponent three-bet from, his/her tilt factor, and so on.

The author will get you thinking at a more advanced level than before if you haven’t been playing GTO poker. But, more than anything, you’ll become better at value-betting, which should lead to an increase in profits.

He uses numerous hand examples with detailed reasoning behind every suggested move so that you make the most optimal decision at all times.

What You Won’t Find in the Book

The book serves one purpose: to make you a better poker player, not to make you pee in your pants laughing, cry, or questioning your purpose in life. But it’s an elucidating read if you’re serious about improving your game.

Advanced Concepts doesn’t teach you how to pick up on physical tells, because that’s not relevant to the GTO strategy. As previously mentioned, you should never base your decisions at the poker table on physical tells, as they’re not an exact science, and can be misleading and inconsistent.

Just because you saw your opponent stare at the flop for 10 seconds and he folded when you bet, it doesn’t mean he always acts that way with a weak hand. Perhaps he happened to be spacing out at that time, or thinking about the leftovers in the fridge.

Cichy teaches readers how to make the best possible decisions, based on your hand strength in relation to the perceived range of your opponent’s hand, not just if your opponent covers his mouth after betting.

Advanced Concepts of No-Limit Hold’em is a worthwhile read for poker players who’ve been stuck in neutral for a while. If you haven’t yet discovered that a flush beats a straight, I’d suggest another read until you’re more advanced in your poker studies.

Hunter Cichy does an excellent job detailing exactly how to win at poker. His system is difficult to exploit. I highly recommend this book for the right audience. In closing, I’m going to leave you with one of the most valuable quotes from the book:

“Without a solid understanding of GTO play, you will fail to adapt and go broke.”