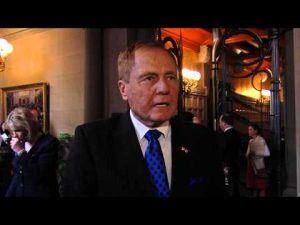 The news regarding online poker in New York has been quick to raise hopes for Internet gaming supporters and quick to dash them, all in the course of just one week. New York State Senator John Bonacic (R-42nd District) introduced a bill to allow for the legalization and licensing of online poker operations in the state, just days before saying that he has no intention of pushing it through the legislature this year.

Bonacic clarified that he merely wanted to begin the discussion of online gambling in New York. As neighboring Delaware and New Jersey begin their ventures into the additional revenue and other benefits garnered from online gaming – and as more states look into joining Nevada in the industry – Bonacic wanted to put the topic on the table for its consideration and the start of a debate that will undoubtedly be a heated one.

The New York bill introduced by Bonacic came with a statement that indicated the importance of a discussion about online poker. He noted that it would “regulate online poker here in New York to protect consumers, prevent underage gaming, and combat problem gaming.” He added that “New Yorkers are today spending millions on overseas, illegal gaming sites” that have no such protections. The bill immediately went to the committee that he chairs on Racing, Gaming, and Wagering.

Online poker legislation in New York, according to the details of the bill, would offer 10 online poker operators the opportunity to apply for 10-year licenses, which cost $10 million each. They would have to commit to paying a 15 percent gross gaming revenue tax, which would consist of revenue minus winnings.

The New York State Gaming Commission would regulate and oversee the industry, which would be restricted to poker due to its classification as a skill game. A special clause in the bill would prohibit “bad actors” from participating, however, and those actors are classified as any companies that accepted bets in the United States after 2006.

The Poker Players Alliance (PPA) was one of the first to weigh in on the new bill. PPA Executive Director John Pappas commented that New York indicated seriousness about the industry and the desire to be included in it. However, he also noted that despite being a positive first step, it had little likelihood of moving forward.

“The sponsor of the bill is the Chairman of the Senate Gaming Committee, but there is no House companion bill at this time. Getting House support will be critical and, without that, it will be a real challenge to have legislation considered this year,” Pappas said.

The PPA has been involved with New York legislators in the shaping of a move toward the regulation of online poker, but they are not alone. PokerStars’ parent company Rational Group was reportedly lobbying members of the New York delegation earlier this year. Top lobbyists even reportedly held meetings with New York Governor Andrew Cuomo, who has long been a supporter of land-based gaming in the state. Even so, the clause in the current bill would prohibit PokerStars from participating as an Internet poker operator in New York, due to their “bad actor” status.

Other supporters of the movement include MGM Resorts and Caesars Entertainment, both of which have expressed support for the New York bill, as well as interest in establishing land-based gaming facilities in the state. MGM President Bill Hornbuckle released a statement last week, saying, “We are excited by the opportunity to offer online poker to New York players and will pursue it aggressively.”

Of course, there are opponents as well. The New York State Conservative Party released a statement late in 2013 to officially oppose Internet gambling, saying it would be “a threat to established gambling sites that have rigorous licensing and regulations,” while the group asserted that “gambling on the Internet would be unregulated and possibly attract national and international crime syndicates or terrorist organizations intent on hiding money to facilitate the purchase of weapons.”

Interesting read,and information. I would love to hear about anything happening in Florida, if any! Best wishes to all you New York online poker players. 🙂