The serenity of super high-stakes poker players who are usually some of the most calm, cool, and collected was interrupted briefly this weekend, when a flash of violence broke out in Bobby’s Room. 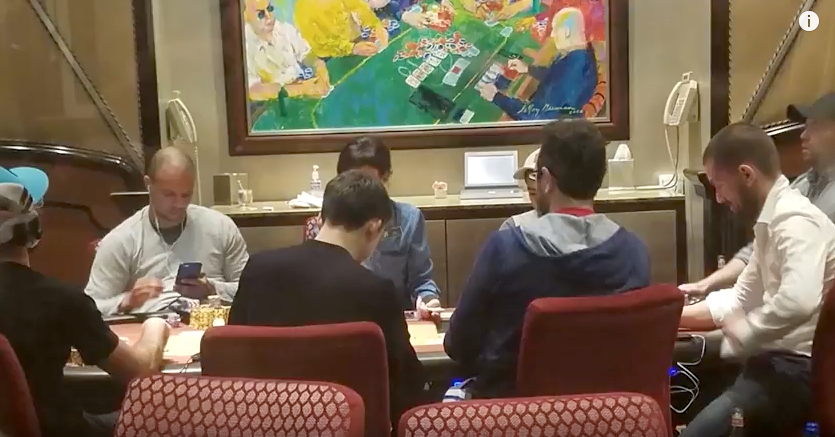 A glimpse inside Bobby’s Room, where Phil Ivey (left, seat 9) and Gus Hansen (right, seat 3 or 4) are just two of the pros playing this summer in the Bellagio Big Game, where blinds are currently $3,000/$6,000. (Image: YouTube / Doug Polk Poker)

Lower-stakes pro Jimmy Fricke was watching the Big Game from across the Bellagio poker room on June 25 when he tweeted:

“Full on fist fight in Bobby’s room just broke out. Was over pretty quick but wow.”

Although Fricke wasn’t close enough to get the full story, he noted that the scuffle was supposedly between “Ivey’s bodyguard” and “some guy in the game,” with no reliable explanation of what sparked the scuffle.

As is often the case when the World Series of Poker is in full swing, Bobby’s Room, the special area inside the Bellagio poker room but separated by glass walls, has become home to some of the highest stakes poker action in the world.

Further speculation across Twitter and various poker forums produced some more information of unverified reliability. A 2+2 user known as GazzyB123 claimed to have seen a video of the incident, and asserted that no punches were thrown but things did get physical.

GazzyB123 wrote on 2+2 that the video showed two African-American males standing up and staring each other down when “the big big dude just throws him to the ground like a rag doll and the other guy gets up and just sits back down hahahaha.”

No other information has come to light, and no video of the rumble has surfaced. There were no other reports of how Bellagio security responded to the matter.

But outsiders know that the games inside Bobby’s Room are indeed playing high. Gus Hansen has been in town and tweeting updates about his progress.

Scott Seiver confirmed on Twitter that the blinds were now at $3k/$6k in the Big Game. On June 22, he tweeted that he’d been awake for 24 hours playing in it, and by June 24 he was claiming to have been at the table for 44 of the last 48 hour.

Despite the grueling sessions, he wrote that it’s going to be a “great summer.” Of course, that’s assuming actual violence can be kept to a minimum.

I’m just excited to see that Phil Ivey is still alive and well in the poker scene haha.