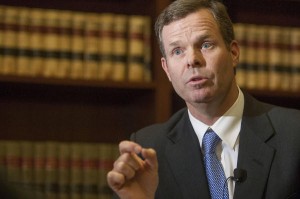 Two former Utah attorneys general have been arrested by the FBI on 21 counts of corruption, some of which relate to the payment processing company at the heart of the Black Friday indictments. Ex Utah AGs John Swallow and Mark Shurtleff are accused, among other charges, of receiving or soliciting bribes, tampering with evidence and obstructing justice.

Shurtleff served three terms in office from 2000 to 2012 and is the state’s longest-serving AG. Swallow was elected as his “hand-picked” successor, but was forced to resign last year as the corruption accusations mounted.

Many of the charges relate to their allegedly venal relationship with Jeremy Johnson who, with Chad Elie, was the co-owner of payment processing company SunFirst bank. SunFirst was closed down by the Department of Justice (DoJ) for processing gambling transactions between PokerStars, Fult Tilt and their American customers after the Unlawful Internet Gambling Enforcement Act (UIGEA) had made it illegal to do so, and Elie was one of the 11 people indicted by the DoJ on “Black Friday”, April 15 of 2011.

Johnson was not indicted then because he was already being investigated by the Federal Trade Commission due to the illegal business practices of his telemarketing company, iWorks, which is alleged to have scammed credit card users out of $275 million. While Elie served five months in prison for his role in the events surrounding Black Friday, Johnson remains in hot water and it seems he has turned against his former high-ranking associates in order to buy himself some clemency.

Johnson has confessed to allegedly bribing the former attorneys general on various occasions, for the purposes of obstructing the federal case against iWorks and to further his payment processing activities with SunFirst.

He also makes the extraordinary claim that he paid a million dollars on behalf of Full Tilt poker to an associate of US Senate Majority Leader Harry Reid (D-NV) in return for the Senator’s sponsorship of a bill that would seek to legalize online poker at the federal level. Reid did indeed sponsor such a bill, which failed, but has strenuously denied the allegations, as have several other figures who were alleged by Johnson to have knowledge of the dealings.

In 2012, Johnson secretly recorded an hour-long meeting with Swallow, in which he is heard to make “veiled threats” to the then acting-Attorney General regarding the bribery allegations. It seems that this conversation may have resulted in Swallow attempting to destroy thousands of emails and meeting notes from several computers, thus incurring the charge of tampering with evidence.

Some of the other charges against Shurtleff and Swallow relate to political favors procured for Utah’s payday loan industry. The pair, who were released on bail within hours of their arrest, protest their innocence. On leaving jail, Swallow spoke to assembled journalists.

“This finally gives us the opportunity to start to respond back,” he told them. “With multiple investigations, we were hesitant to say anything. Now, we have our constitutional right to make our case in court. I look forward to that.”