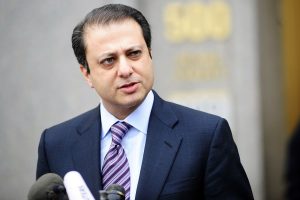 Preet Bharara the man who brought down online poker in the US is turning his attention to DFS. (Image: nypost.com)

Watch out daily fantasy sports! Preet Bhahara, the man who brought online poker in the US crashing to its knees, is coming after you.

The US Attorney for the Southern District of New York, the architect of Black Friday, has launched an investigation into the embattled industry and in particular into the business models of its two main proponents, DraftKings and FanDuel.

Both sites became embroiled in an “insider trading” scandal early this month when it emerged that they had allowed employees, who may or may not have been party to sensitive data that would have given them an edge in the games over their opponents.

Both companies have since barred their employees from engaging in any form of fantasy sports whatsoever, but the scandal raised serious questions about the opacity of the companies’ business models in the absence of a regulatory governing body.

DraftKings announced this week that an investigation conducted by an independent law firm had cleared the employee at the center of the scandal of any wrongdoing.

In late September, Ethan Haskell, a mid-level data manager, accidently released player data before the start of the third week of NFL games, information that the average player only has access to after the weekly line-ups are locked in.

The incident set alarm bells ringing about how many employees working within the industry had access to similar data and when.

But the investigation by international law firm Greenberg Traurig found that no impropriety had occurred and that Haskell had in fact received the data in question before the games took place but 40 minutes before the line-ups were locked.

“GT has received complete cooperation from the Company at every turn, and has been given unfettered access to all documents, systems, and individuals. GT’s independent investigation has confirmed that the Company’s initial findings were correct, and that the allegations that Mr. Haskell gained an unfair advantage in the $5M NFL Sunday Million contest due to his possession of the Company’s non-public information are without merit.”

While this clears Haskell from suspicion of foul play, the question still remains: who else has access to this data and when.

It’s something that Bhahara and New York Attorney General Eric Schneiderman are determined to find out.

It may be that both FanDuel and DraftKings’ business practices are exemplary, but the players need greater transparency to restore their faith in the DFS industry and the current investigations are likely to leave no stone unturned.

he must be one of those good holy rollers that think it is ok to lose all u own on a rigged lottery, but u will burn in hell for playing poker!!!!!!!!!!!!