Bill Perkins didn’t wow Twitch viewers with brilliant play on Wednesday, but the hedge fund manager was competitive during the first of many heads-up sessions against poker pro Landon Tice. 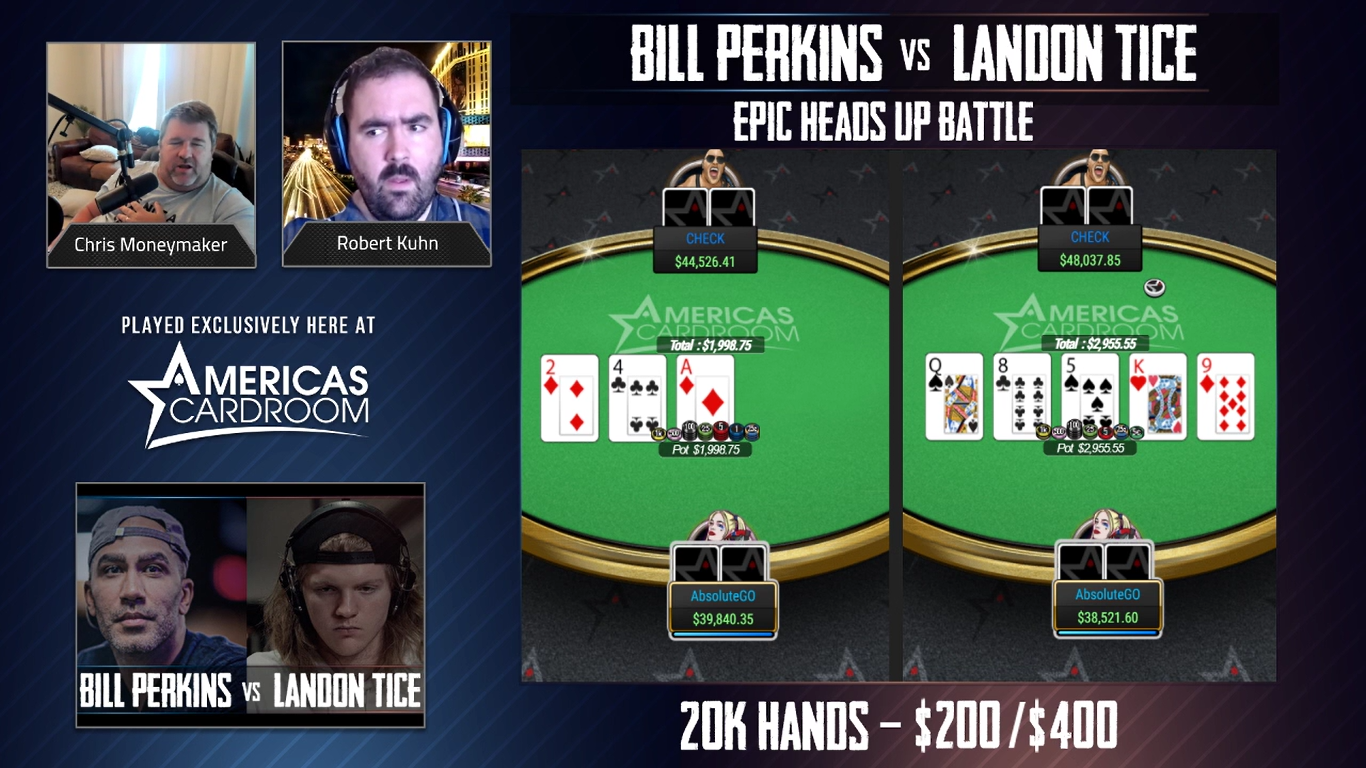 Perkins doesn’t have to be better than his opponent to win the match. In fact, he can be significantly inferior and still profit. That’s because the wealthy amateur poker player negotiated some favorable terms, including requiring Tice to pay him back nine big blinds per 100 hands played at the end of the match, which equates to $720,000 over the agreed-upon 20,000 hands at $200/$400 stakes.

Although Tice is likely the superior player in this match, the poker community seems to believe Perkins may actually have an advantage given the hefty handicap he negotiated. Only 31% of respondents in a recent poll created by Doug Polk favor Tice. With one session in the books, we still don’t know just how much of an edge Tice has straight up. But if Day 1 is any indication of how this match will play out, the young pro might be in for a tougher battle than he may have anticipated.

Wednesday’s session began a few minutes after 2 pm PT on the Americas Cardroom poker site. Chris Moneymaker, a new ACR pro, joined Robert Kuhn to provide commentary on Twitch for what turned out to be a three-hour session.

Almost immediately after the session began, Perkins won multiple large pots and took an early lead of nearly $140,000 — the equivalent of 3.5 buy-ins. He came out aggressively, showing no fear firing away with three and four-bet preflop raises on a few different occasions.

Tice didn’t let the rough start get to him though, as he quickly battled back and began taking over the match by winning multiple pots. Perkins, however, refused to sit back and take a beating; he answered right back thanks to a huge pot with pocket nines (see below).

Perkins overbet the river for $60,000 with nines full, enticing a call from Tice who had ace-high. The play earned Perkins a pot worth $141,000 — the biggest of the session. Tice made another incorrect call in a big pot with an unknown hand (cards weren’t exposed) earlier in the match when Perkins bet big with K-Q on a queen-high board (one pair).

When all was said and done, the poker players completed 624 of the 20,000 hands. Despite losing a few massive pots along the way, Tice left with an $18,000 profit. Winning the session is certainly better than booking a loss, but Tice must average winning more than $18,000 for every 624 hands played or he’ll lose the match. If he continues this pace throughout, he’ll win only $577,000, which isn’t enough to beat the handicap.

It’s way too early in the match to know if his current win rate is accurate. Tice went straight to Twitter following the conclusion of the first session.

Definitely a swingy session for sure but a LOT of fun 🔥