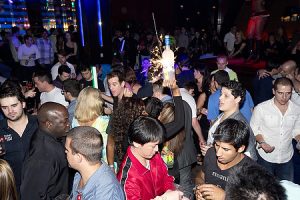 PokerStars does know how to host a celebration; numerous lucrative events are going on now, and during the next few months. (Image: pokerstarsblog.com)

It might seem like PokerStars is always celebrating something or hosting an online poker tournament series. But you won’t hear players complaining, as there are constant incentives to play and take part in the bonuses, freerolls, large tournament guarantees, and immense number of satellites for everything.

With its 900 millionth tournament on tap for April 27, PokerStars is gearing up with the two-week Carnival of Tournaments promotion leading up to that milestone. When that wraps up, the Spring Championship of Online Poker (SCOOP) will be the talk of the virtual poker world.

PokerStars can call it a carnival because there are several elements that comprise the celebration. The main event is Tournament Number 900 Million, which is set for April 27. The $109 buy-in No Limit Hold’em tournament will offer a special $1 million guarantee, as well as $100,000 in added prizes to be awarded to randomly chosen tables for the first two hours. A message will be provided to the winning tables, players will see the money in their accounts, and play will continue uninterrupted. And of course, satellites for the big tournament run for as little as $1.

Over the course of the next two weeks leading up to that tournament, there will be Milestone Golden Sit & Gos. There will be $500,000 in total random prizes added to SNGs starting on April 14. BIG prizes will offer players at that SNG their buy-ins back and doubling the prize pool. BIGGER prizes will give players two times their buy-ins with a tripled prize pool. And the BIGGEST prizes offer five times the SNG buy-in amount to all players and the prize pool multiplied by six. There will also be milestone awards on top of those prizes, which become complicated but lucrative.

The official and final schedule has yet to be released for 2014 SCOOP, and the guarantees are still being determined. However, many players expect that information to be released soon, as SCOOP is scheduled for May 4-18.

Stay tuned for more information as it is released by PokerStars.