Just 12 players had registered at the start of Sunday’s $10,000 buy-in no-limit 2-7 lowball draw event, which would’ve made for a field size that hadn’t been seen at the World Series of Poker since the 1970s. But thanks to the magic of late registration and re-entry, dozens more showed up to account for 95 entries in the field, and a more respectable total prize pool of $893,000. 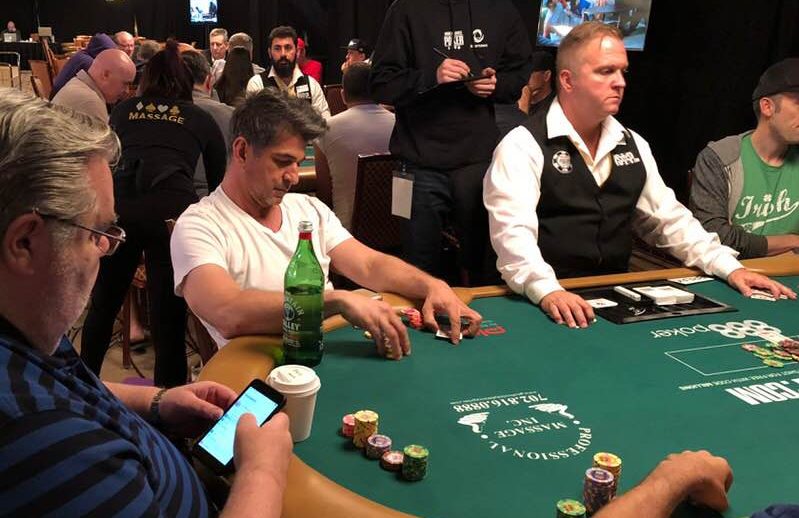 Going in to Day 2, 44 players remained. Several of those who advanced did so by buying in twice. These re-enterers included former WSOP Players of the Year Ben Lamb and Frank Kassela, both busting the first bullet early in the evening.

As is the case with most $10,000 events, this sort of tournament tends to draw some big names. Not surprisingly, Phil Hellmuth showed up late (and busted out early) on Day 2. One of the last people to enter the tournament was none other than Doyle Brunson, who said it might be his last tournament ever.

Within an hour after the tournament began, three old-school poker grinders you might remember from the poker boom era – Shawn Sheikhan, David Benyamine, and John Hennigan – bought in and took a seat inside Amazon room which, by the way, was pleasantly cool after two straight days of dealing with a broken air conditioner.

Sheikhan is known for his combative demeanor at the table ever since a verbal sparring match with Mike Matusow during the 2005 Main Event led to both players receiving a penalty.

In 2011, “Sheiky” was booted from the Aria poker room in Las Vegas for a physical altercation with David “Viffer” Peat. The two poker players who appeared multiple times on “Poker After Dark” and “High Stakes Poker” were spotted fist-fighting outside Commerce Casino in Los Angeles that same year.

Sheikhan, now 49 and the owner of tobacco and tattoo shops, appears to have calmed down a bit but was still quite animated at times on Sunday. “I haven’t been in a fight in four years,” he said to another player at his table.

When his old rival Matusow cruised by in a motorized scooter, Sheikhan hardly took notice. He just kept his head down and played on, finishing Sunday’s session with 73,600 chips — well above the 50,000-chip starting stack, but light years behind Day One chip leader Galen Hall (389,800).

One situation emerged on Sunday that could’ve resulted in players blowing up but didn’t involved the possibility of some decks being marked. Whether that’s a matter of cheating or a manufacturer’s defect has yet to be determined, but 2-7 lowball player Jessie Martin brought the issue to his table’s attention, when he verbally complained that cards at his table were marked.

To prove it, he asked the dealer to spread a handful of cards face down on the table and to pull out some at random. This was no magic trick, but the dealer slid five cards forward, and with 100 percent accuracy, Martin was able he accurately determine whether or not he was looking at a face card.

“I come in here everyday and notice these things but no one says anything,” the visibly upset poker player said to others at his table. “Everyday I just call it out the first time I see it.”

The floor replaced the deck with a new setup and play continued.

Martin ended his Day 1 with 75,800 chips to come back Monday in good shape

Man, brawlers and marked cards. Sounds like something out of Western.

The world is , Now! , so corrupt , even charities are a business scam. Thank god online poker is straight up .

don’t be so sure about online poker. its method may be more complicated.