It’s been a week of exciting action at the Poker Masters, with the final tournament of the high-roller series getting underway on Monday at the Aria in Las Vegas. Like the previous four tournaments, this $100,000 buy-in series finale is being broadcast for serious poker fans on the PokerGO app. Thirty-five players entered (so far), and 14 remain. 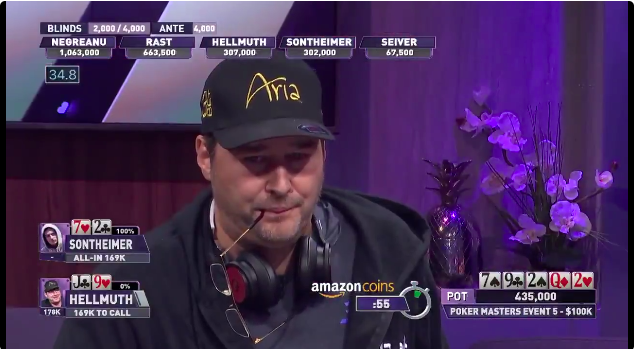 Phil Hellmuth found himself in a difficult position at the Poker Masters $100,000 series finale. He made the smart laydown here, but has an uphill climb, going into Day Two as the smallest stack. (Image: PokerGO)

Among them, Brian Rast will be the chip leader going into Day Two, and Phil Hellmuth, who stretched out his trademark late arrival to a lengthy eight hours, will start the day as the shortest stack.

Rast is no stranger to winning high-roller events at the Aria. In 2015, he won the $500,000 buy-in Aria Super High Roller Bowl for $7.5 million. He’s also won numerous monthly high-roller tournaments over the past couple of years.

No player ended the day with more than 1 million chips, but Bonomo and Daniel Negreanu did surpass the 1 million mark earlier in the tournament. Kid Poker got there thanks to winning the sickest beat of the day.

It came against Koray Aldemir, one of a crew of young and talented German high-rollers competing in the Poker Masters. Just moments after moving to the PokerGO televised feature table, he took his seat in the cutoff and found himself looking at J♠J♦, and he raised. Negreanu, seldom an advocate for three-betting with marginal hands, three-bet with Q♦10♠ in the small blind.

With the action back on Aldemir, he faced a difficult decision to either four-bet or call. He ended up making the call. Both players had huge stacks, so it seemed a reasonable play, but also turns out to be a decision he may be regretting.

The flop came J♣8♦K♠, giving Aldemir middle set and Negreanu an open-ended straight draw. Negreanu made a continuation bet of 16,000, and Aldemir, slow playing his hand, made the call instead of raising.

With a 2♥ on the turn, Negreanu continued his semi-bluff, firing out a bet of 45,000. Aldemir continued disguising the strength of his hand and made the call.

But then, with 183,000 already in the pot, Negreanu got his dream card that for Aldemir would be a nightmare. The 9♠ gave the Team Poker Stars Pro, who so far has been shut out in his pursuit of the Purple Jacket, the stone-cold nuts. Seeking value, he pushed out 125,000.

To Aldemir, the board wasn’t very scary. A set of jacks, given Negreanu’s line, is almost always going to be good. Daniel could have a hand such as AK, 88, or KJ, all hands he has beat. So, he decided to shove his remaining 414,000 chips in the pot and received the bad news when Negreanu snap-called.

The hand propelled Negreanu slightly above the million-chip mark. On the ensuing hand, he won a decent pot against Steffen Sontheimer to grow it further, to more than 1.1 million. But as play continued, it was downhill from there for the six-time WSOP bracelet winner.

Phil Hellmuth has been a dutiful, hat-wearing ambassador for the Aria in Las Vegas for years. He rarely misses a major event there. But, eight hours into the tournament, he was still a no-show. While known as a regular late arrival, this seemed an unusually long delay. Rumors began swirling he was on a plane to Atlantic City to compete in the WPT Borgata Poker Open.

But then, at 10 pm, he finally graced the Aria tournament with his presence and took his seat next to Negreanu at the televised feature table. Starting with 200,000 chips, he quickly ran his stack up to 300,000, but soon it began dwindling down to what is now 9 big blinds.

Deep Run Before It Starts

Byron Kaverman, the 2015 GPI Player of the Year, has announced he plans to late register before the start of Day Two. That will make for a 36th entry and possibly more could follow. Registration will end once play resumes.

Official payouts won’t be announced until play begins on Tuesday. But it’s looking like the top prize will be somewhere around $1.5 million. That will be enough to lock up the fashionable Purple Jacket, awarded to the player with the most winnings throughout the five-tournament series, unless Sontheimer finishes in the top three.

Having cashed in three of the four events (and won one of them), Sontheimer entered the final Poker Masters tournament leading the Purple Jacket race with $1,221,000. His closest competition has all busted (including Doug Polk, Nick Schulman, and Bryn Kenney), so now it looks like a top-three finish will be enough to lock up the award.

Fourteen players remain. That number could turn to 15 if Kaverman buys in before cards go in the air.

Tuesday’s action starts at 2 pm PT (2:30 pm on PokerGO), and will conclude when the tournament reaches a final table of seven. Those players then reconvene Wednesday at 2 pm to see the cards that will decide a champion, and determine who gets to parade around in purple for the next year.